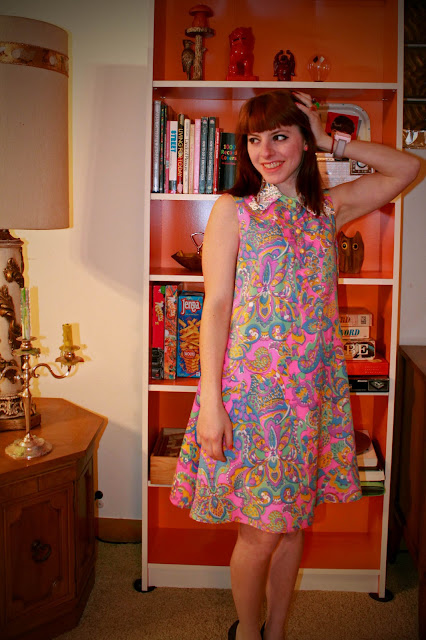 And it's the most beautiful thing I have made so far! 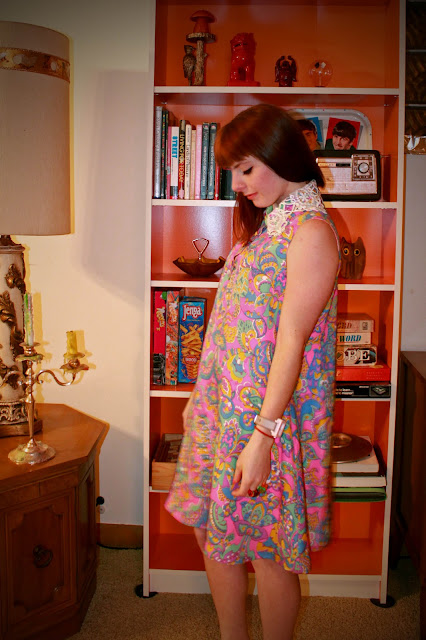 Max's mom gave me this fabric for Christmas along with the little yellow buttons. I struggled for a bit what to do with it. I wanted to do this amazing vintage fabric justice so it took me nearly 4 months to decide on a design, but I finally did!

The pattern work was relatively easy and I actually made all my patterns perfectly, including a placket with facing which I don't ever recall doing before. If I have, it was in college and I don't remember much from college. 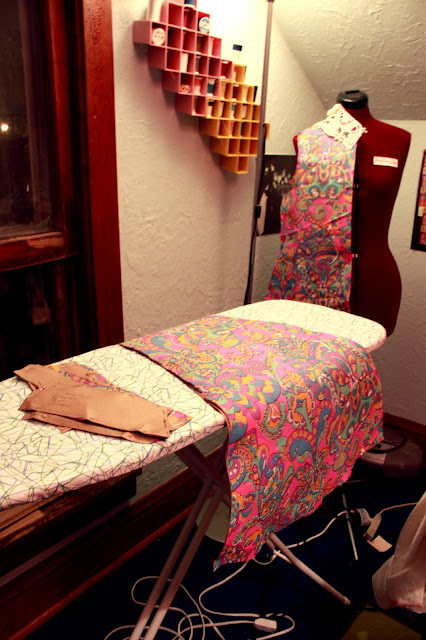 I did have a bit to overcome with sewing on this one though - sewing a placket (which wasn't too hard but I had difficulties getting it to line up perfectly), and putting in near-perfect buttonholes which I had to rip out about 4 times. Note that I only had 4 buttonholes to create! 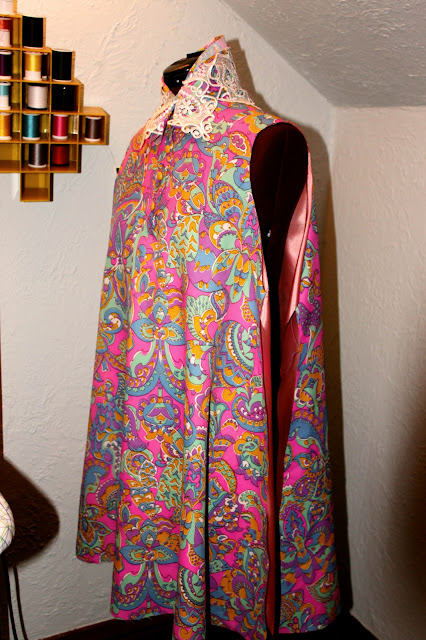 Sewing the side seams was fun however and happened in all one fell swoop. Putting a lining into a dress is easy when you know the correct steps - armholes, neckline then turn. After that, you can sew your lining and self fabric all in one go of the machine.

This is something I learned when I sewed the Cloud Dress. 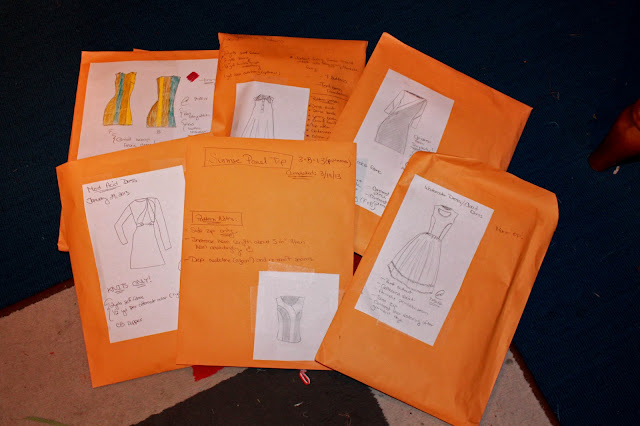 After I'm done with patterns, I do this sort of dorky thing where I organize them in pattern packets and even make a little drawing of what the design is to tape on the outside as well as sometimes list pattern pieces included. You can see the Judy Dress pattern packet top center.

I was told once that it's a great idea to save all your pattern work so later on if you like something, you really can just Frankenstein it all together. I used to just throw patterns away after making something and then I realized I was stupid and doing far more work than necessary. 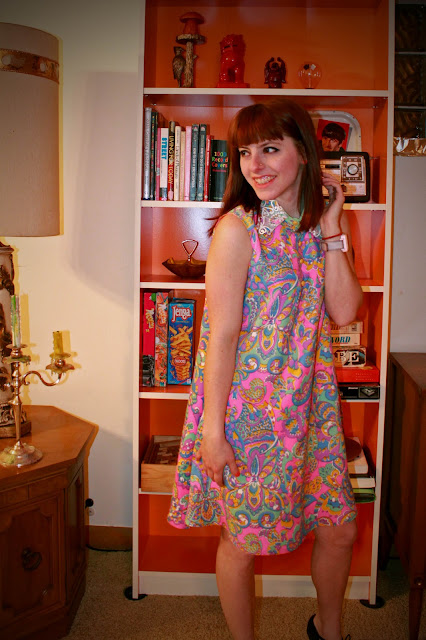 I am SO beyond impressed with myself! It's hard to tell on photos, but it has a contrast collar stand as well as a pointed collar with a lace overlay. I can't believe that the lace on the collar worked as well as it did because I really wasn't sure what I was doing with it! 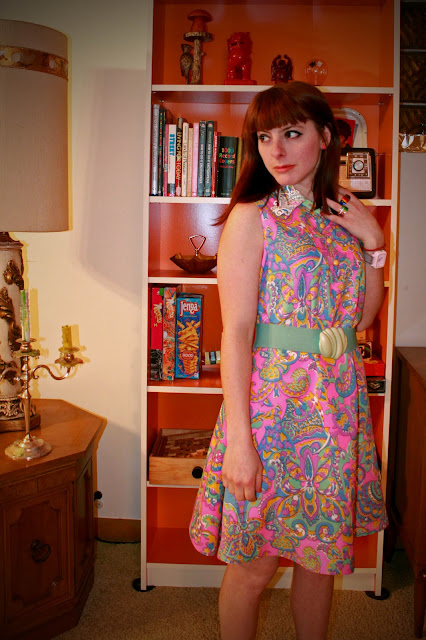 It even looks great with a belt! I really wanted to take photos of this dress at the Chicago Botanic Garden but the weather has not been cooperating lately. Many people's basements have been flooding from so much rain recently and it's overall not been so nice out. 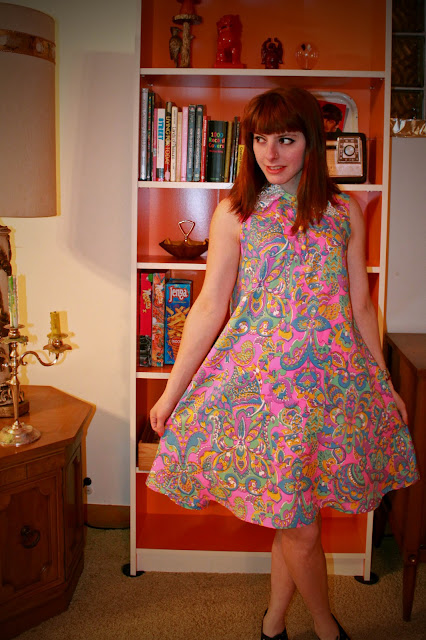 I'm pretty impressed with how lightweight this dress is too. It probably only weighs about 6 oz., lining and all. It's going to be perfect for really hot summer days where you want a light, flowy dress that gets lots of breeze. 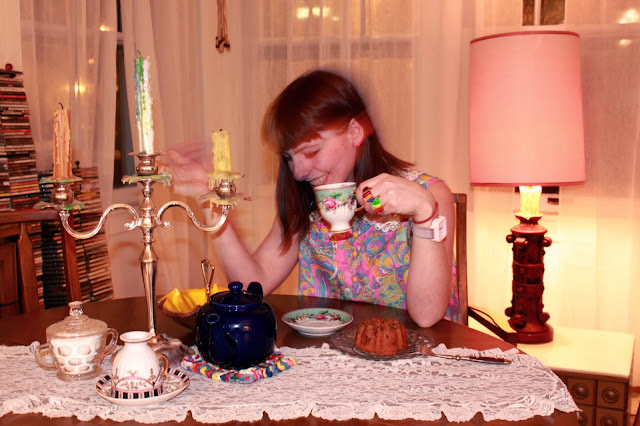 So... thanks Max's mom (Judy) for this amazing fabric! I'm glad I could do it justice and that it turned out so well.

I still have some pieces leftover, so perhaps it will become pocket lining in something else someday!