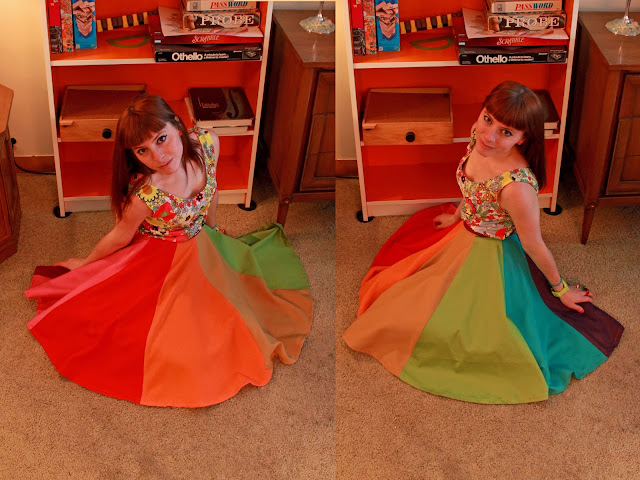 As if I really needed anything else in my life that was rainbow!

But I digress. I've been doing some major stash-busting recently and thought up this quick project to get rid of multiple colors of fabric that have really little use anywhere else. I was inspired by my friend Anastasia Chatzka who is pretty much known for her usage of circle skirts but also wanted some way to make it.... ya know, more gaudy! Gaudy like me!

So I made an 8-panel gore circle skirt!

The top is something I thrifted about 2 years ago at this point with the intention of adding a collar to it but I really don't think it needs anything.  I dug that up going through my collection of scrap fabric - I had forgotten all about it! I simply couldn't pass up a print like this one even though it wasn't my size.
I did some adjusting to it and here is the very un-scientific way I did it: 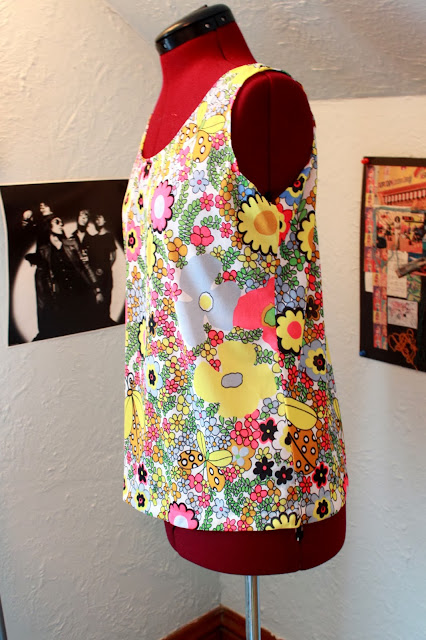 See how large it was? First I put it on my dressform which is about my size. (She has a slightly bigger waist, but hey.) 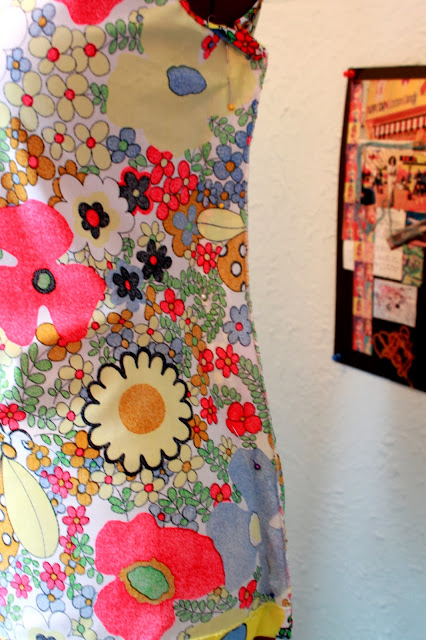 I then turned the shirt inside out and pinned along where and how I wanted to fit it. (Old design school trick when things aren't quite fitting? I don't know.) 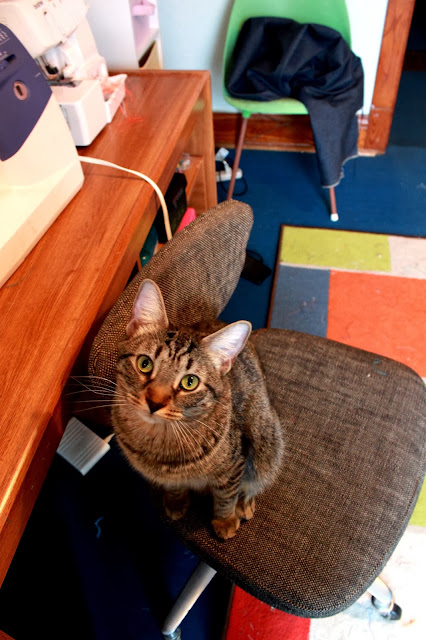 Percy had plenty of questions. He was particularly all up in my sewing today. 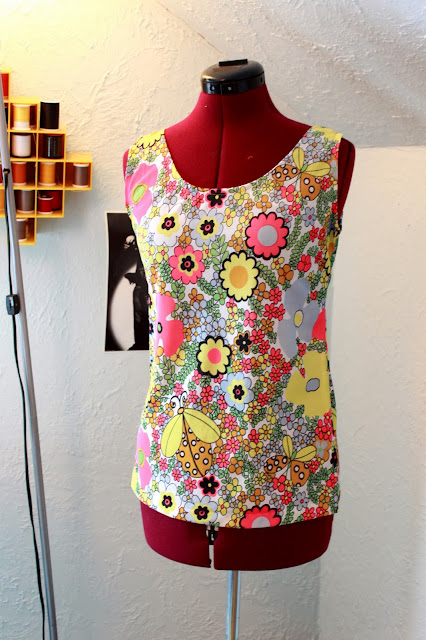 Then I stitched along where I pinned and ta daaaaa! Don't forget to clip off the excess fabric inside because I almost did. I serged the seams off so they were together.

I drafted a 25" waist here (which maybe should have been more like 25 1/2" but it'll be fine) and I went with about 22" long. I'm only 5 feet tall so this might be a bit shorter on someone who is more normal-sized. 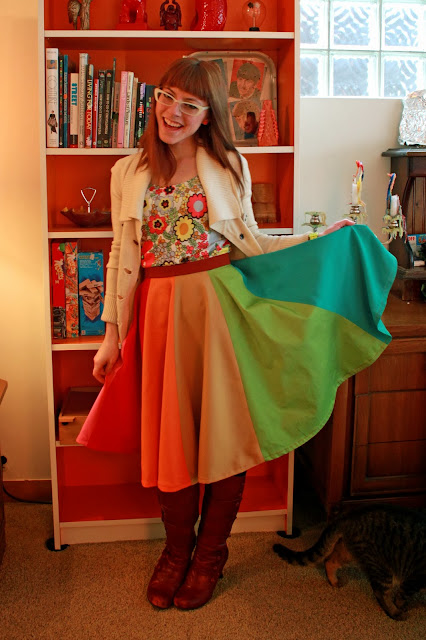 I don't think I have ever owned a circle skirt in my life! Super fun. Let's go through a run-down of where all the fabrics are from just because!

Red - I made a pair of palazzo-type pants for my drag queen SPRADA back in 2011 with that red twill.
Orange - Bought this year to use on Sunrise Panel Dress mostly.
Yellow - This might be leftover yardage from the Space Dress.
Green - A friend who was moving let me buy some fabric from her that she needed to get rid of. This was amongst that collection.
Blue - Leftover from the Tower Midi. I had so much fabric from that dress for some reason! Maybe because Textiles will only let you buy 1yd for each fabric and no less?
Purple - My mom send me a bunch of essentially eveningwear fabric remnants. I don't know why she was hoarding these to begin with and since I don't do eveningwear, I was planning on not using it ever. But this time, I used the wrong side of the fabric so there was far less sheen. Success!
Pink - I did the same thing for this one as I did for the purple with the shiny side down - only this fabric was leftover from 2008 when I made myself a Princess Peach costume. Hey, I was playing a lot of Mario Kart back then!  Some of the pink fabric was also used within the Sweetheart Dress this year as a stripe.
Brown - Ok, I don't really know where this came from. I may have used this as a contrast piece on a raglan top I made in school in like, 2006? Hard to know for sure. It's probably been around a while. 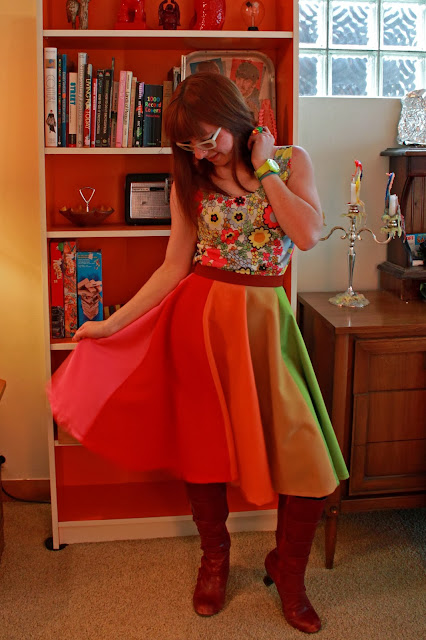 Typically with a skirt like this I would have pockets, but due to it's unique construction, I wanted to be able to wear it with the zipper on the left side, right side, or center back. It's designed with center back placement in mind but since it's a circle skirt and the same on all sides... yeah! Options! I also like that the waistband has a belt-like effect. 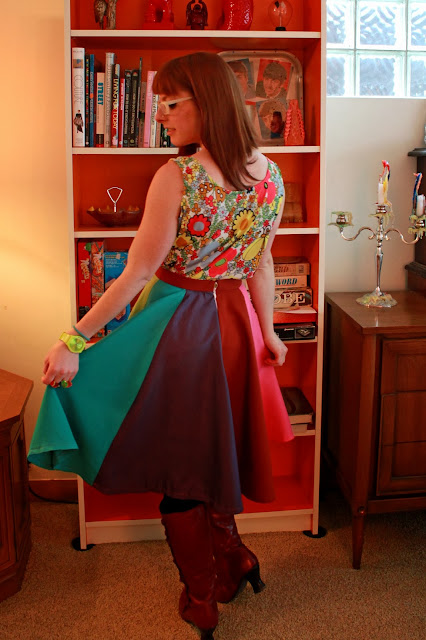 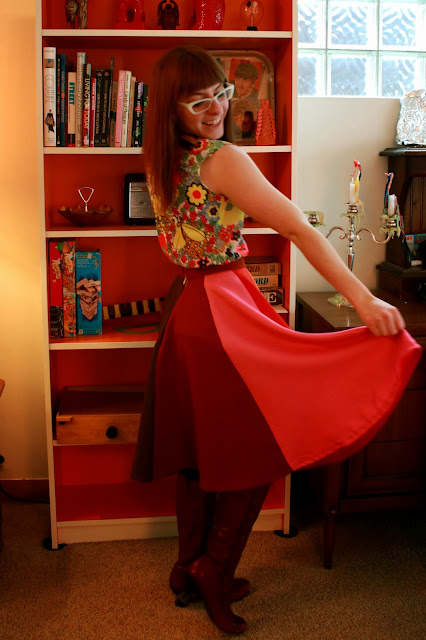 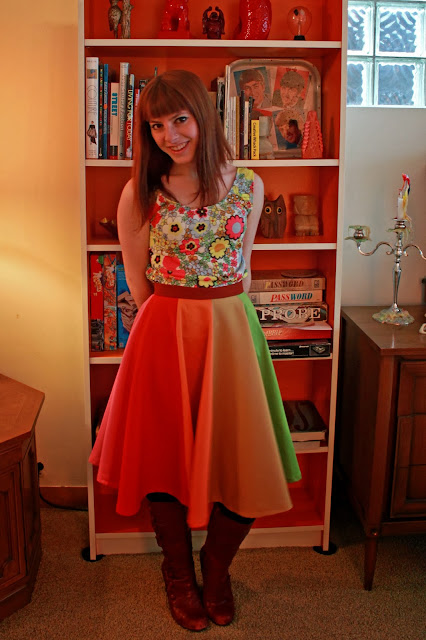 I can't wait to wear this whole outfit! I know no seasons, so I have paired it with fleece lined leggings , some awesome DSW boots, and I'll be wearing it with a nice warm cardigan. I wear sleeveless tops all year long, so that's no issue for me.