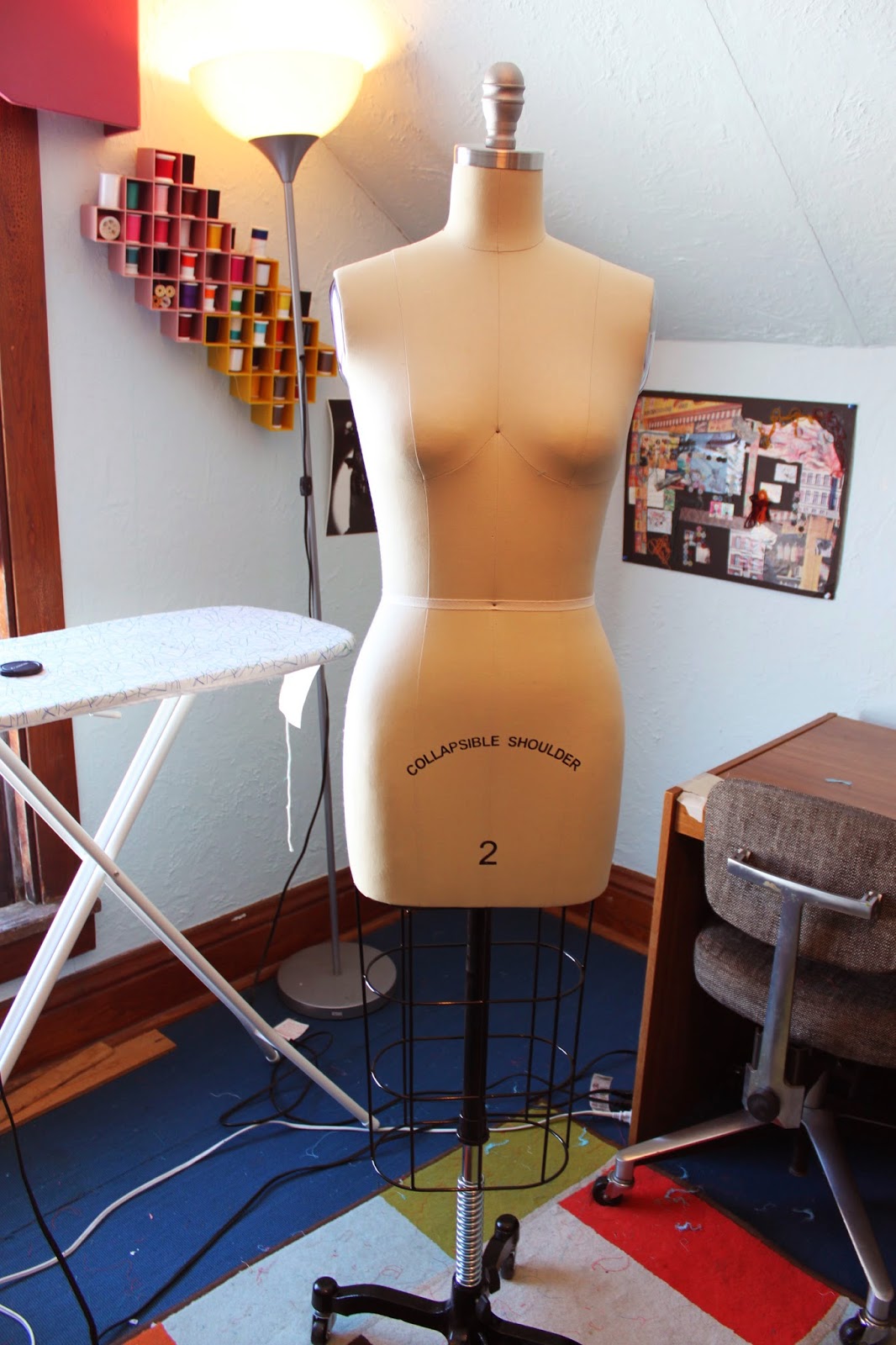 Overall, I am very happy with how sturdy she is as well as the quality. It's almost identical to dress forms I learned on while at school and best of all, she's not on a tilt like my old dress form!

The service part about getting her to me is what I am unhappy with. I really, really, really wanted to like my experience with The Shop Company which is where she's from. Compared to home-sewing dress forms you can get at big retailers, she's a steal for the price. However, what I paid in price I seemed to have to "pay" in time and frustration.

Story time! (this is a long one) :
I ordered her on New Year's Day - a late Christmas gift from my mom as she didn't know what I wanted/needed. Ordering a dress form like this, I cried because I have come so, so far in the past year or two with my designs, shows I've been in, and things I have worked on, sold, etc. I deserved it!

So of course I was beyond excited to open the box. I knew something was wrong when I had put a "hold at FedEx location" notice on the package and then my boyfriend texted me about my dress form arriving at home that day. The tracking number still said "in transit". Confusing!

When I got home, I cracked open the box to discover that the company had mistakenly sent me a size 8, a non-collapsible shoulder like I ordered.  I immediately contacted them and they confirmed that my dress form was on it's way and that I never should have received that size 8. Not a big deal: problems happen like that from time to time and I was glad that I caught it. I'm not a crazy person and I wasn't going to just keep it. The representative thanked me for being honest about the mistake and was sending a label for me to ship it back.

I wasn't mad at all at this point. Mistakes happen!
The next day, my boyfriend and I go pick up my dress form at the location we had it holding at. Freezing rain, ice, gross sleet-snow...  but we picked her up! I didn't want her to be sitting out on the porch.

I excitedly opened it up only to find..... a size 12 in the box. I ordered a size 2! I can't even understand how they had made two mistakes with my order. I can't lie, I cried. I was soooo disappointed. Here I am, waiting for  this moment since.... I don't know,  graduating fashion deign school to get a real dress form and the order was messed up twice.

My boyfriend hid the boxes in his office all weekend so I wouldn't have to look at them and be upset about it. I spoke to a representative again and they were sending me two return labels now.

This is where it gets weird: They sent me labels with other customer's shipping information on it. To make matters worse, one of them had the return address on the box as MY address! Of course, I let the company know I was not ok with this, but yet my poor boyfriend carted BOTH dress forms off to be shipped by himself. The company did suggest we schedule a pick up, but we couldn't do that without having an account with said shipping company.

So after all this aggravation, and promises that my dress form would be shipped out as soon as I sent the other dress forms along (we shipped them on the 16th), the representative says he will "make sure" my form gets sent out on Monday - the 21st and I would get a tracking number. By the 23rd, I still hadn't gotten a tracking number so I emailed. They sent it out Thursday the 23rd when they had promised Monday. Argh!

So the dress form finally arrives on Monday the 27th and I half-expect something to be wrong with it again..... but all was fine. Nearly a month later, and I have the damn dress form in my possession. And the two people we sent the wrongly received dress forms to got their forms far quicker than me thanks to my honesty and integrity.

I am extremely disappointed because I had seen this dress from on two blogs before I ordered - Adventures in Dressmaking and Gertie's New Blog For Better Sewing. Both good reviews!

Before I ordered this one, I was ready to save up my money for a female form with legs for more pants projects but after this experience, this company has lost a nearly $500 sale from me as well as my recommendation about them. I am not a dishonest person, but had I known it would have cost me this much time and aggravation, I would have kept that size 8 mistakenly sent to me!

But now, some more photos of her as well as a project I'm almost done with: 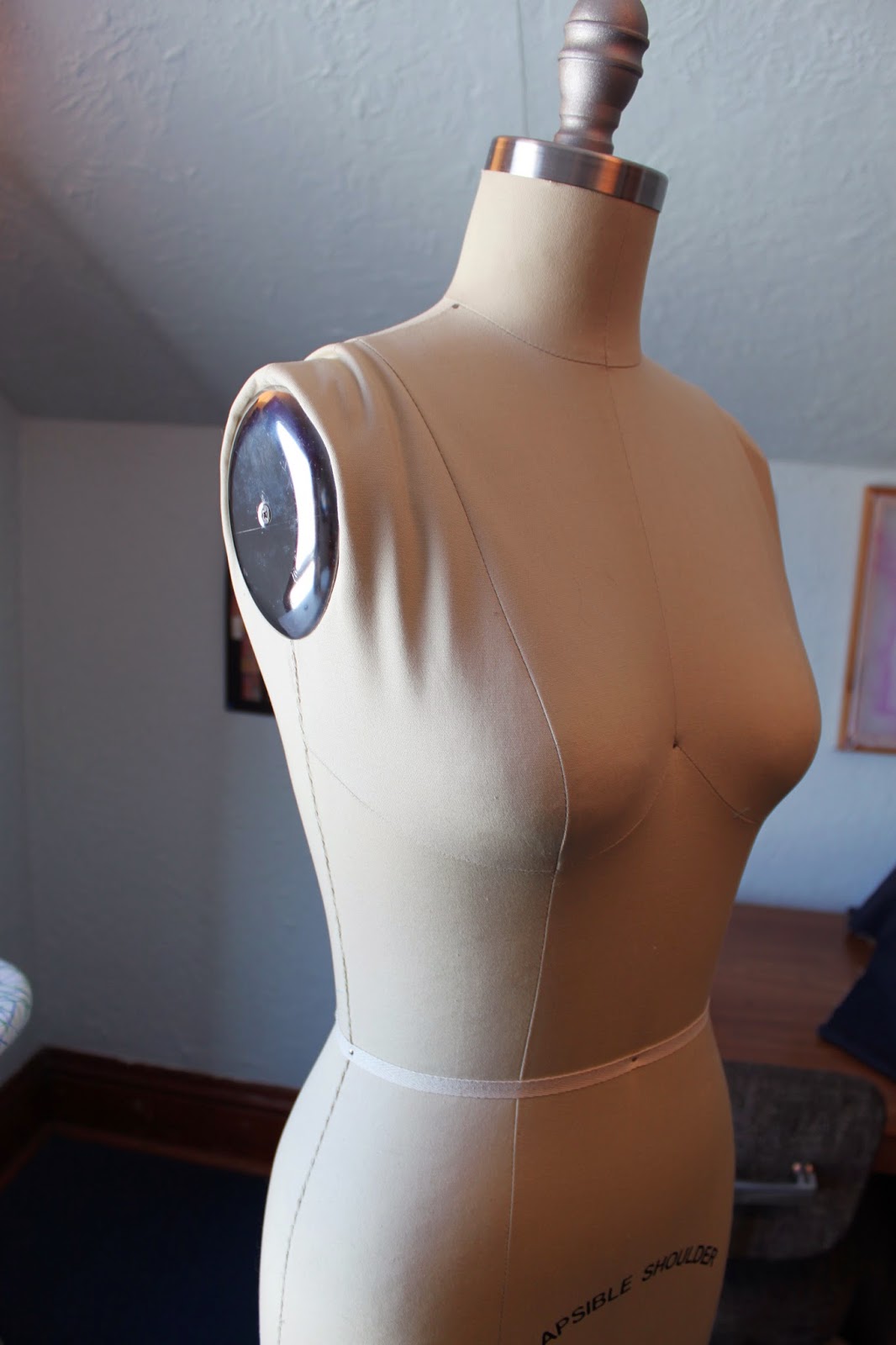 Collapsible shoulders! This is especially great for those garments that aren't as easy to get into. Ones at school had these shoulders. 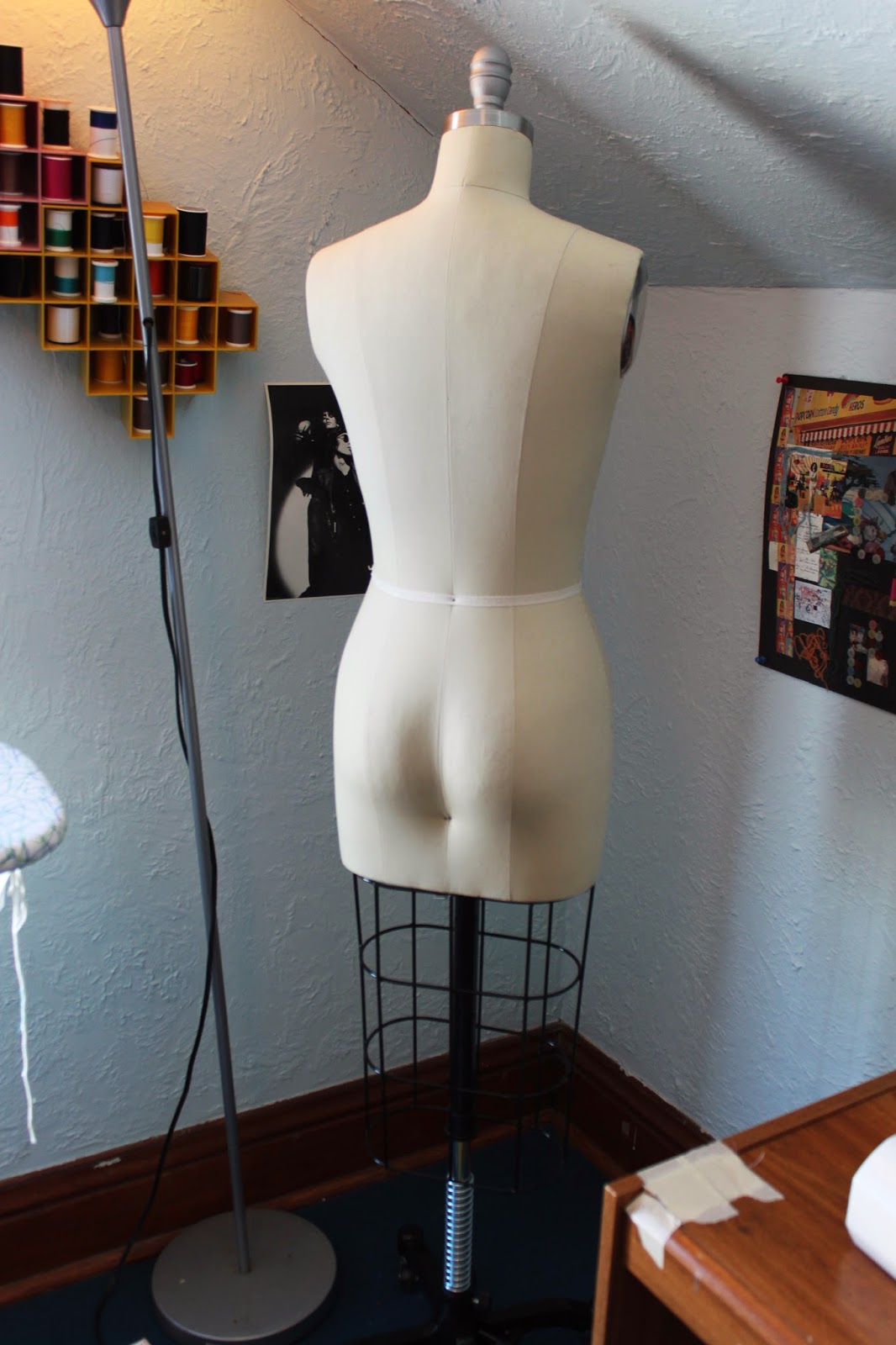 She even has a little butt! 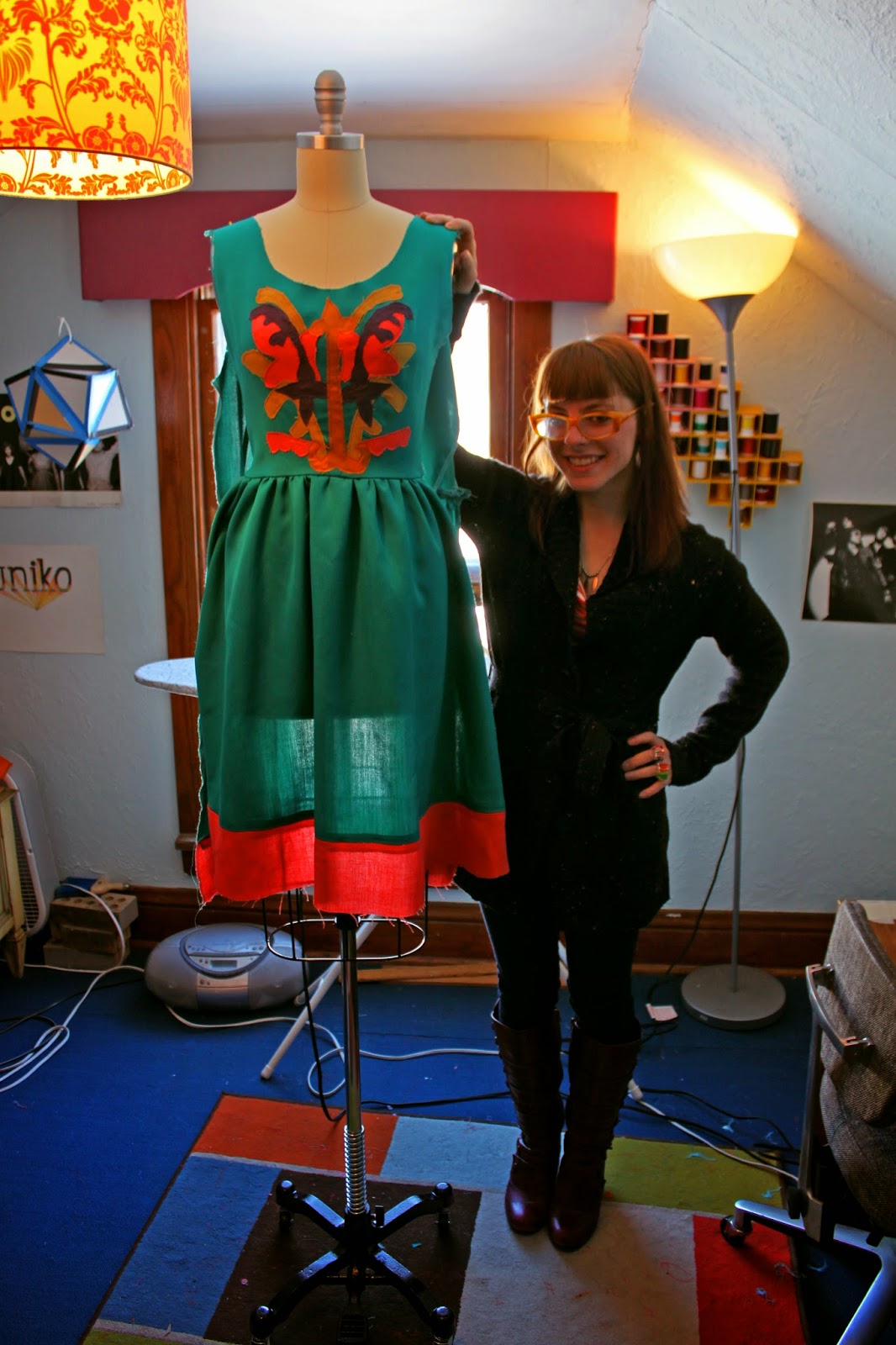 Dress I designed and am still finishing. The dress form goes REALLY tall which is great if you do evening wear (I do not). For reference, I am 5 feet tall. With those boots, I'm probably 5'3" so she's quite close to 6 feet here. 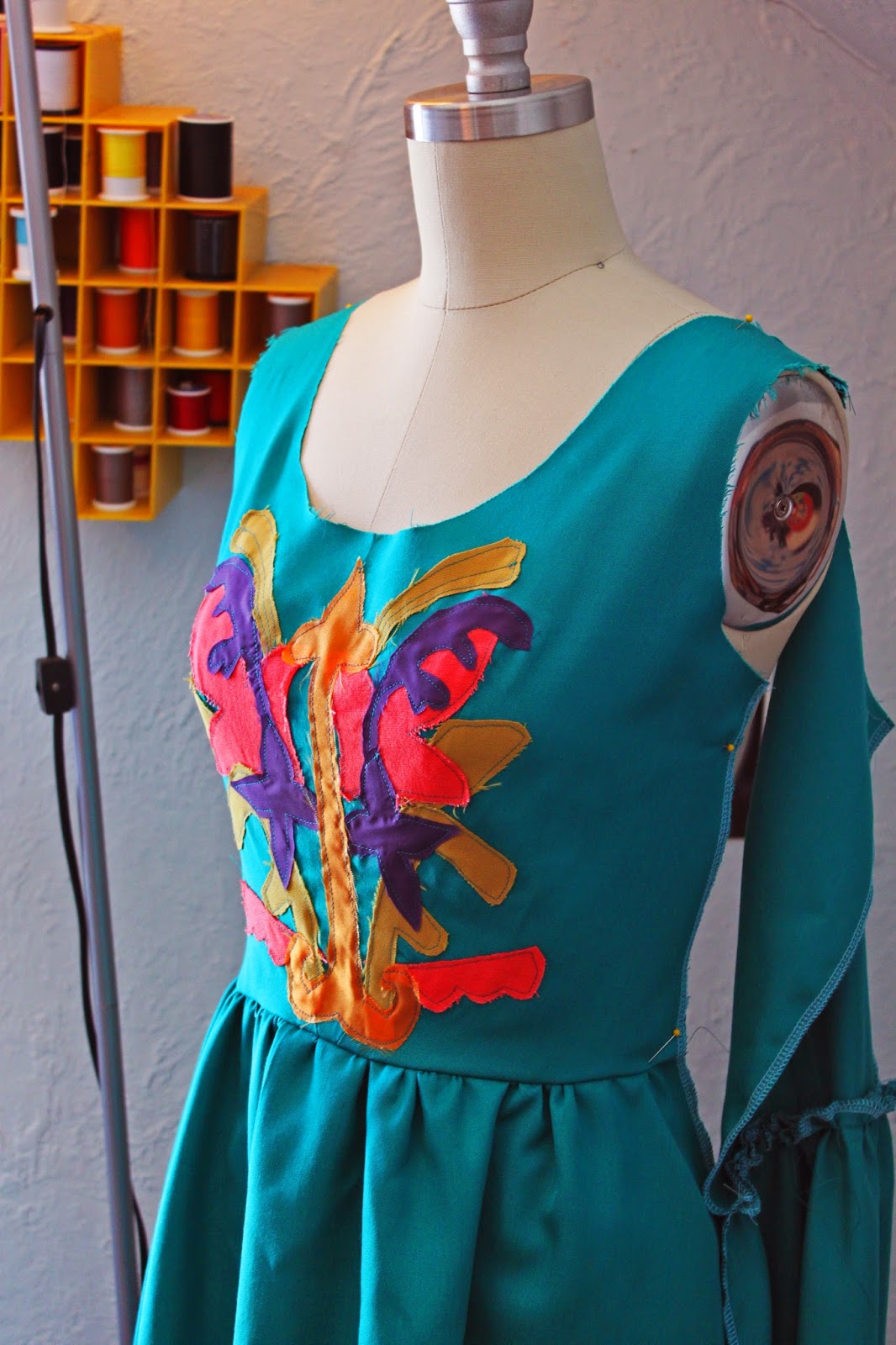 I'm actually really, really proud of this dress. I came up with it in the shower one morning thinking about how much I love to do my prismatic/mandala design work but know I wanted to do more fashion design stuff. I combined the two and got this!

The pieces on the front are individually cut out and will have a frayed, textured look around the edges. This one truly is my masterpiece so far! 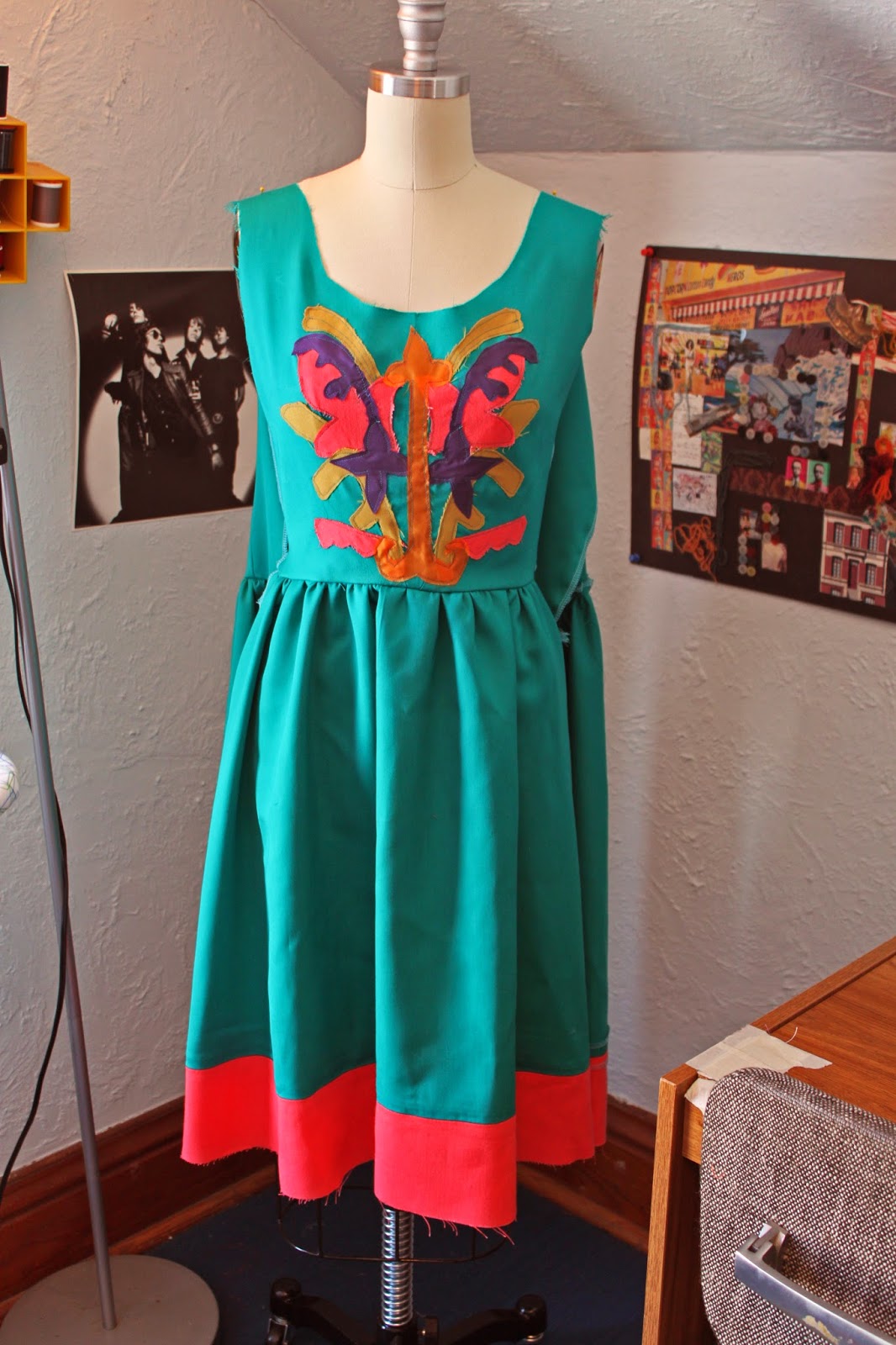 The skirt will have inside side seam pockets as well! I'm only to the point of having to put a zipper into it now, sew in the pockets, and finish the hem. Despite all the applique work, it came together very quickly.

This sample size 0 will be available for immediate purchase in the Etsy shop later on this week! I am also taking custom orders in either same colors or choosing up to 4 colors for the same design.

I'm still finalizing some more new designs to sell in the shop as well as going to batten down the hatches on working on the PDF pattern. I know I mentioned it might be quiet around here for a bit, but after this dress, I mean it! PDF time!