October 04, 2018
It's funny how the more things change, the more they stay the same. Aside from my amazing rainbow staircase I painted.... 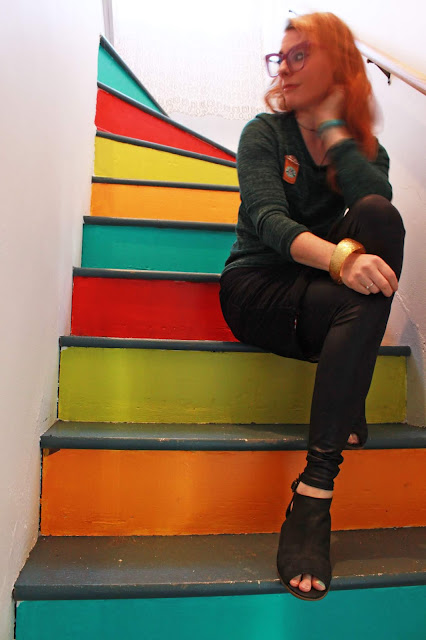 Other than that, I am back to taking photos in front of my orange bookshelf! I think that's what I mean about things staying the same. I used to take photos in front of it in the bungalow house I rented in Chicago from 2009-2014.

By now, I am fully moved in and settled into my house in Grand Rapids, Michigan -- one WE BOUGHT. I know I mentioned it in my last blog post, but it's my biggest accomplishment so far in my entire life. We didn't accept any help from anyone in our family either -- so it was ALL us making the house thing happen. 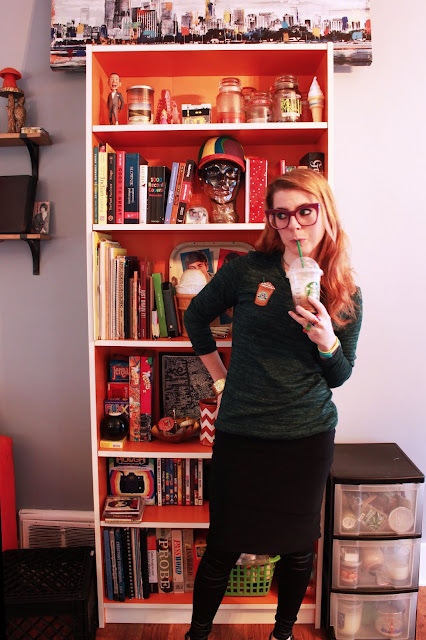 During my settling in time, I have been able to already crank out 3 new items -- one being this ridiculously fun frappuccino sweater. I used a sweater knit from Fabric.com but found the Starbucks patch online. 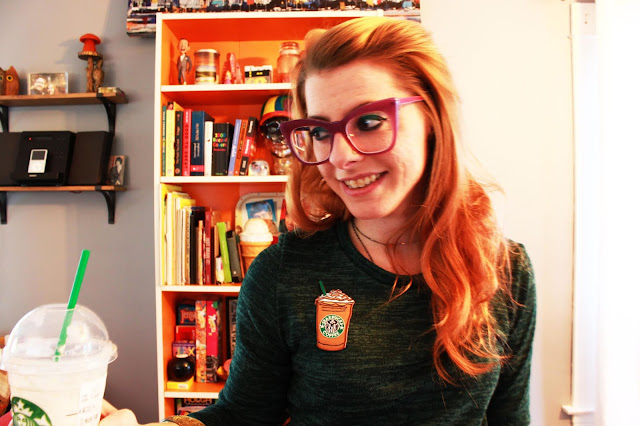 I'm sure there is some sort of licensing issue with the seller of the patch and Starbucks itself, but .... kinda not my deal to worry about! Haha. Funnily enough, I have never necessarily been a huge Starbucks person myself (I drink basically only teas). I indulge on the pumpkin spice train for sure but I have taken a liking to the mocha frappuccinos in place of ice cream sometimes. 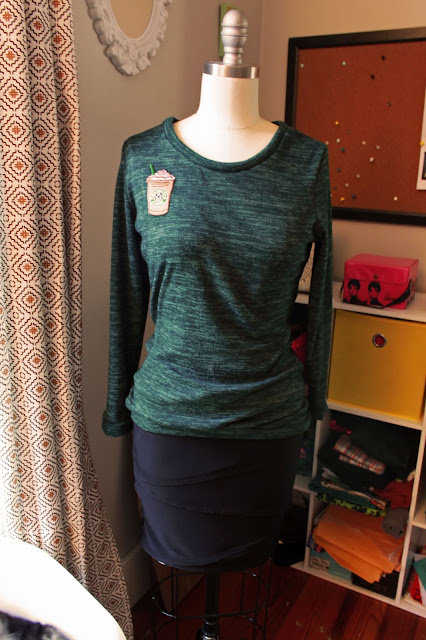 The top here was super-easy -- I used KwikSew's K4207 but edited the pattern to have long sleeves. I also added a bottom hem cuff and sleeve hem cuff. It's just a basic knit pattern tee, so that works really well for any knit top. 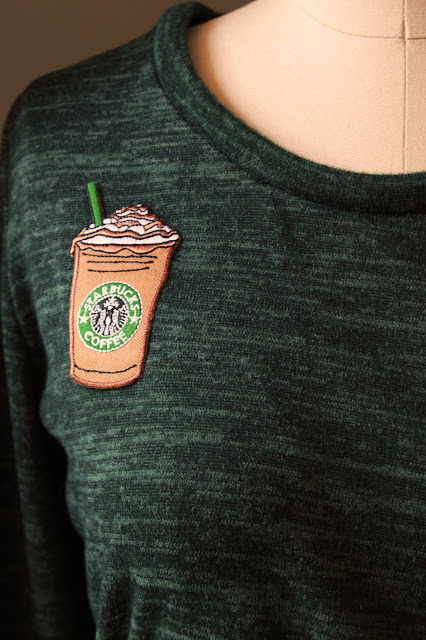 And here is the pretty accurate patch. 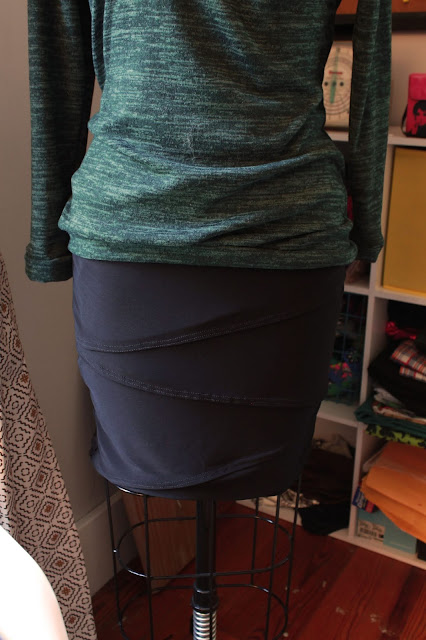 I ended up making a 2nd Jade Skirt by Paprika Patterns recently, and here that is!

I accidentally ordered a slightly thinner ponte knit than I really wanted (I wanted that nice medium weight!) so I had to make a few adjustments to how I sewed it. Normally, you would leave the folds not stitched on the top, but there was no way this fabric was going to behave otherwise. I ended up using a double-needle to secure the folds and went on my way with it. 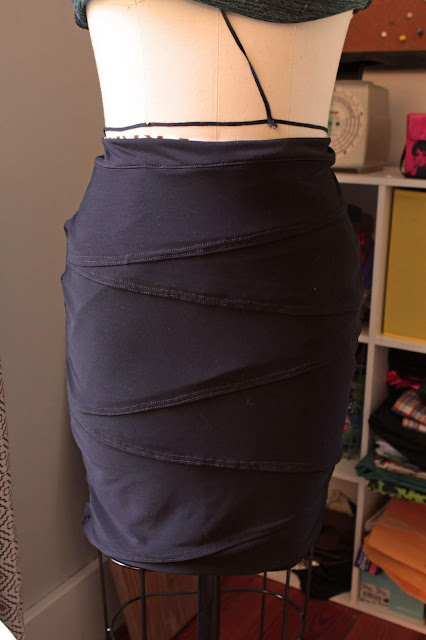 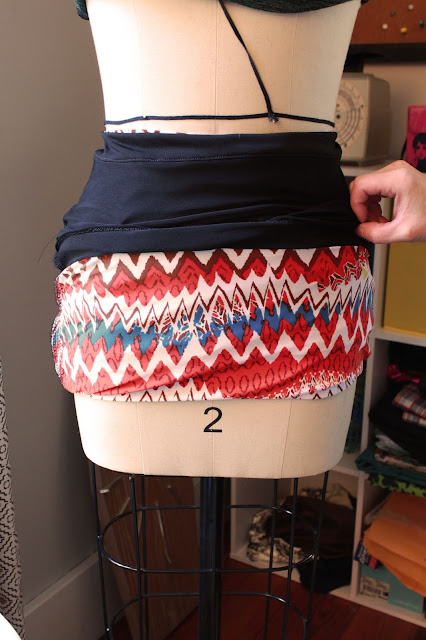 The inside has this fun zigzag lining! It was cheap and I thought it would be fun to have a nice surprise inside of a plain black skirt. 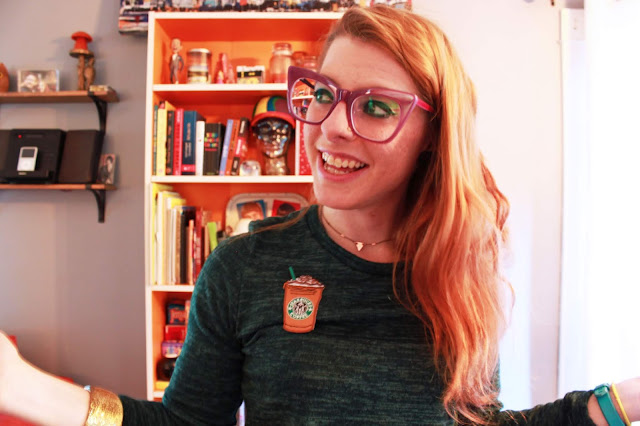 Grand Rapids has been really great so far. I'm familiar enough with it since I used to "escape to the city" over here in high school. However, 15 years ago, Grand Rapids was a fairly boring city. Sure, I went to the free GRD shows in Rosa Parks Circle in 2003-ish and saw bands like Eve6 and more local-ish bands like 19Wheels in Ah-Nab-Awen Park, but other than that? There wasn't a whole lot going on.

It would be a full 5 years after I left for Chicago that they would start world-renowned public art party, Art Prize.

I think that's what's so nice about this city now -- it seems like they really embrace their art culture and help it along. I find they are open to new ideas and trying new things as a whole. (They are testing driverless shuttles next year downtown!) It seems like GR is a very recycle-heavy city and they love alternative energy/solar power where applicable.

I have almost anything I would ever want right near me -- from big concert arenas like Van Andel to smaller venues like The Pyramid Scheme (fully equipped with old school arcade games), to authentic food like bowls of pho about 2 miles down the street from me (buy one get one 50% off!!!), a good Thai place, and a great Mexican place right nearby where I live. Also plenty of Middle Eastern food and even Albanian which I had never had until recently!

If a store you like isn't on 28th Street somewhere or within the mall, you probably don't need it. I can see myself being sucked into the Shops at the Centerpoint Mall with all of my favorite things in one place --Joann Fabrics, World Market, DSW, and TJ Maxx/Home Goods.

I think the best thing so far about GR is the people -- out in public people are decently nice and accommodating. (I am NOT used to anyone saying "excuse me" in public places like a grocery store or mall. Often times now I am the "rude" one out here because I got so used to standing in random crowded spots, not paying attention, and not moving!)

I also have old high school good friends who still live nearby, plus Patrick's family. It just feels like everything is in the right spot right now and that's amazing.

Although we are right in the city proper, my house has trees surrounding it so it feels like you are in a slightly more wooded area. If I got tired of the city, then not even 5 or 6 miles away from me is the country. We went out to a corn field/apple orchard/winery this weekend called Robinette's and were able to do apple cider and donuts and a corn maze! There is also a nice-looking heavily wooded park called Millennium Park (haha) that I haven't had a chance to visit yet, but it's on my list.

Grand Rapids is a smaller city with a big city heart. I think it matches my personality very well!