April 20, 2015
Sometimes I like to make life difficult for myself and this dress experiment is no exception. 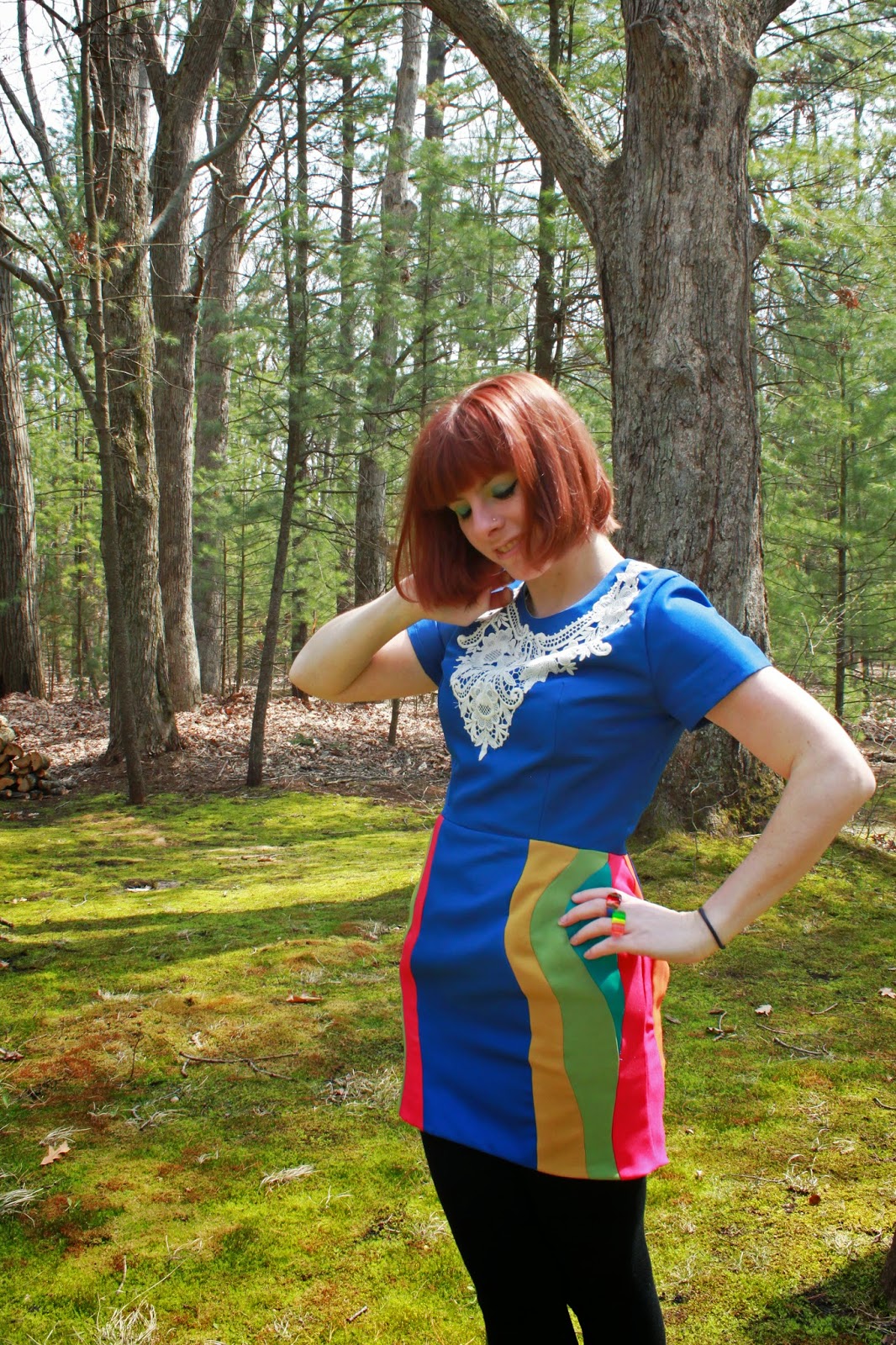 This is one of those designs that came to me one day and I just had to get working on it. The process I used to make it is much like the Trafalgar Dress.

I created a silhouette I wanted and then went ahead and traced the lines I wanted onto the muslin. I had also recently seen this tutorial on sewing opposing curves without pins and wanted to try it for myself. Lately, I have been cranking through the fabric I have and I have a TON of little teeny scraps. Needless to say, I used the scraps for the colorblocking on this dress. 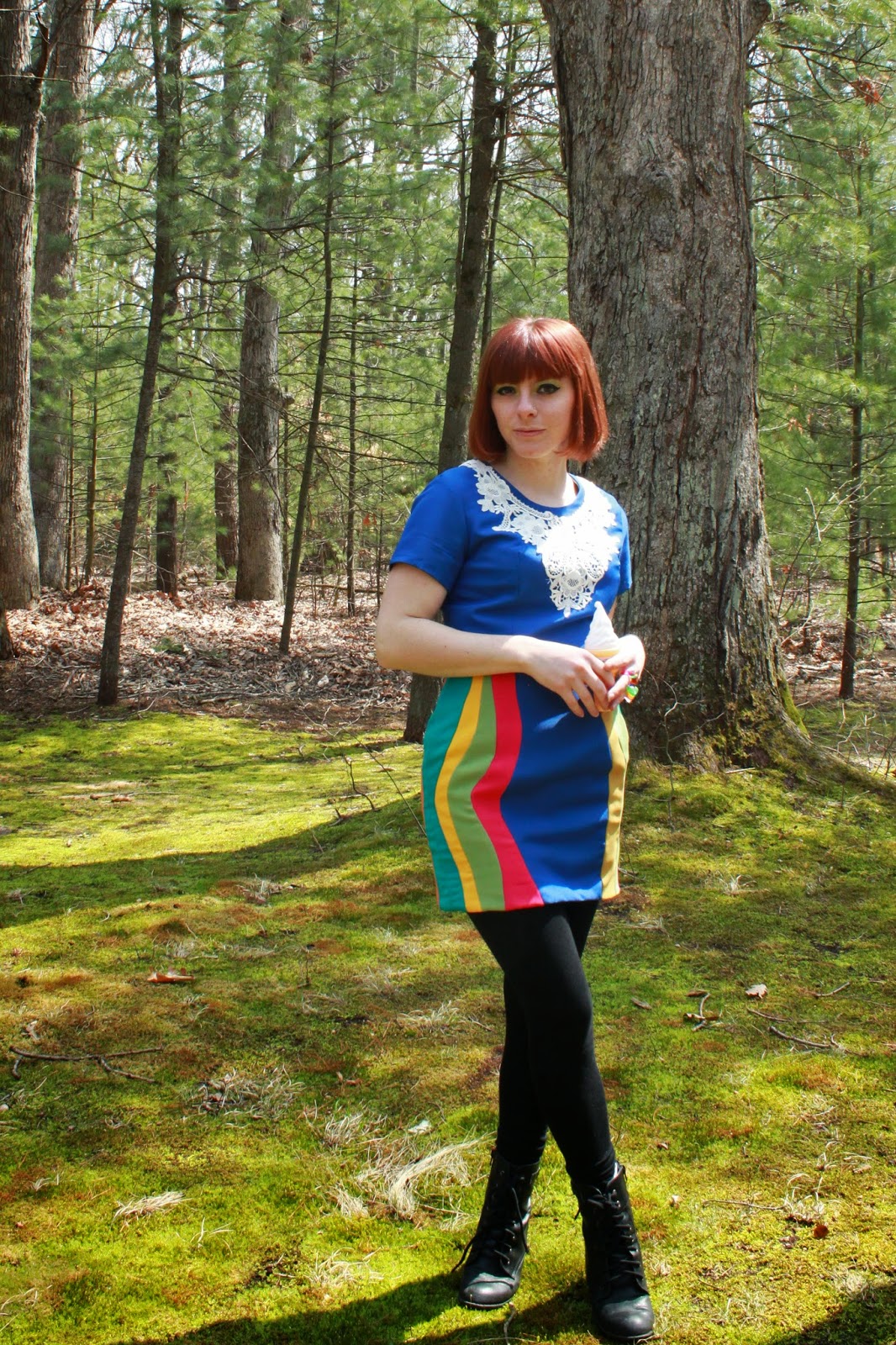 The dress isn't 110% perfect as the opposing curves even though clipped and pressed (a ton) still don't lay entirely flat, but I am mostly pleased with the design detailing of it. The dress is also fully lined! I needed a way to encase all of the clipping that was going on, so I just went for a full lining. 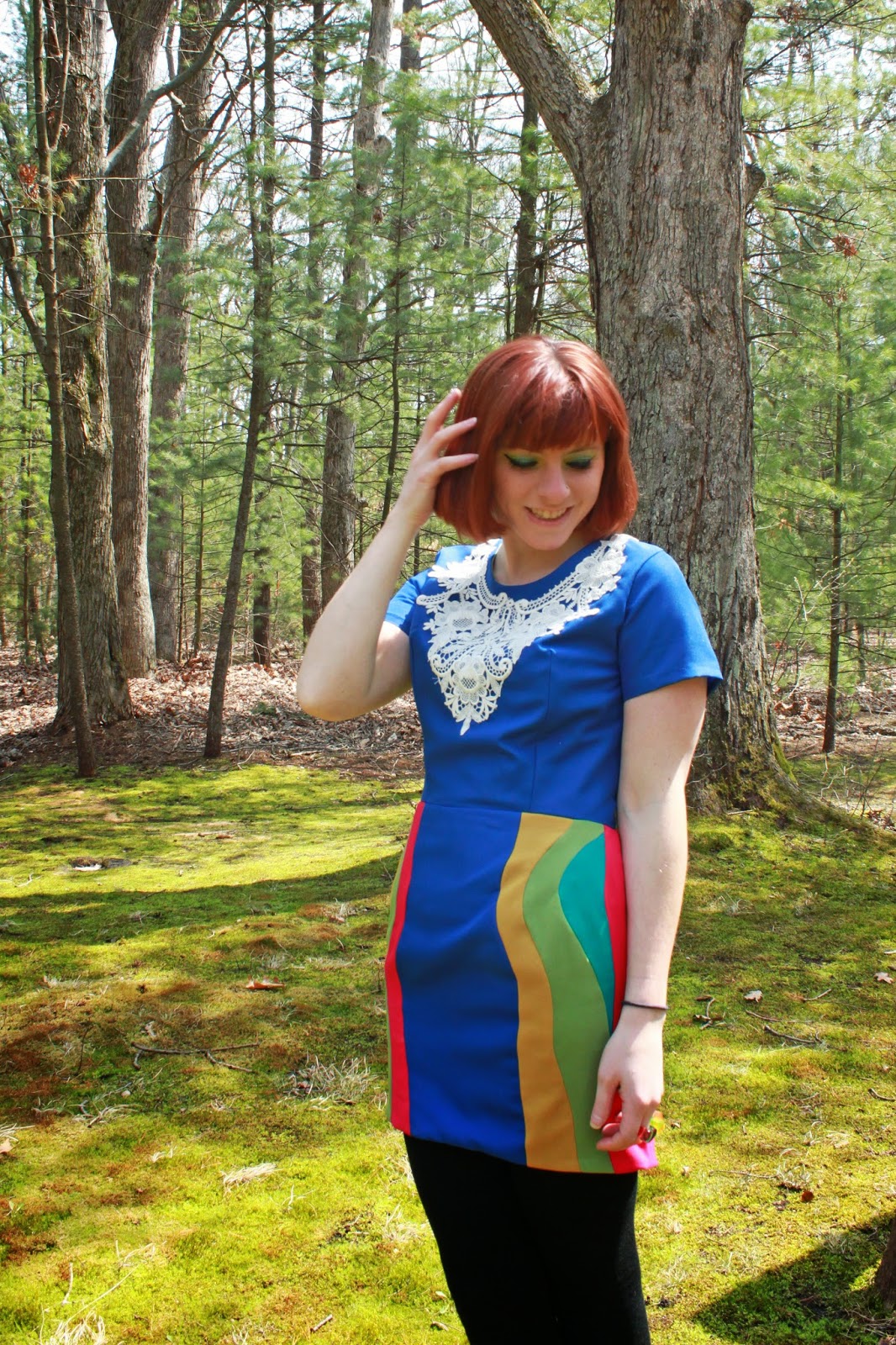 Here are some photos of it on my dressform.... 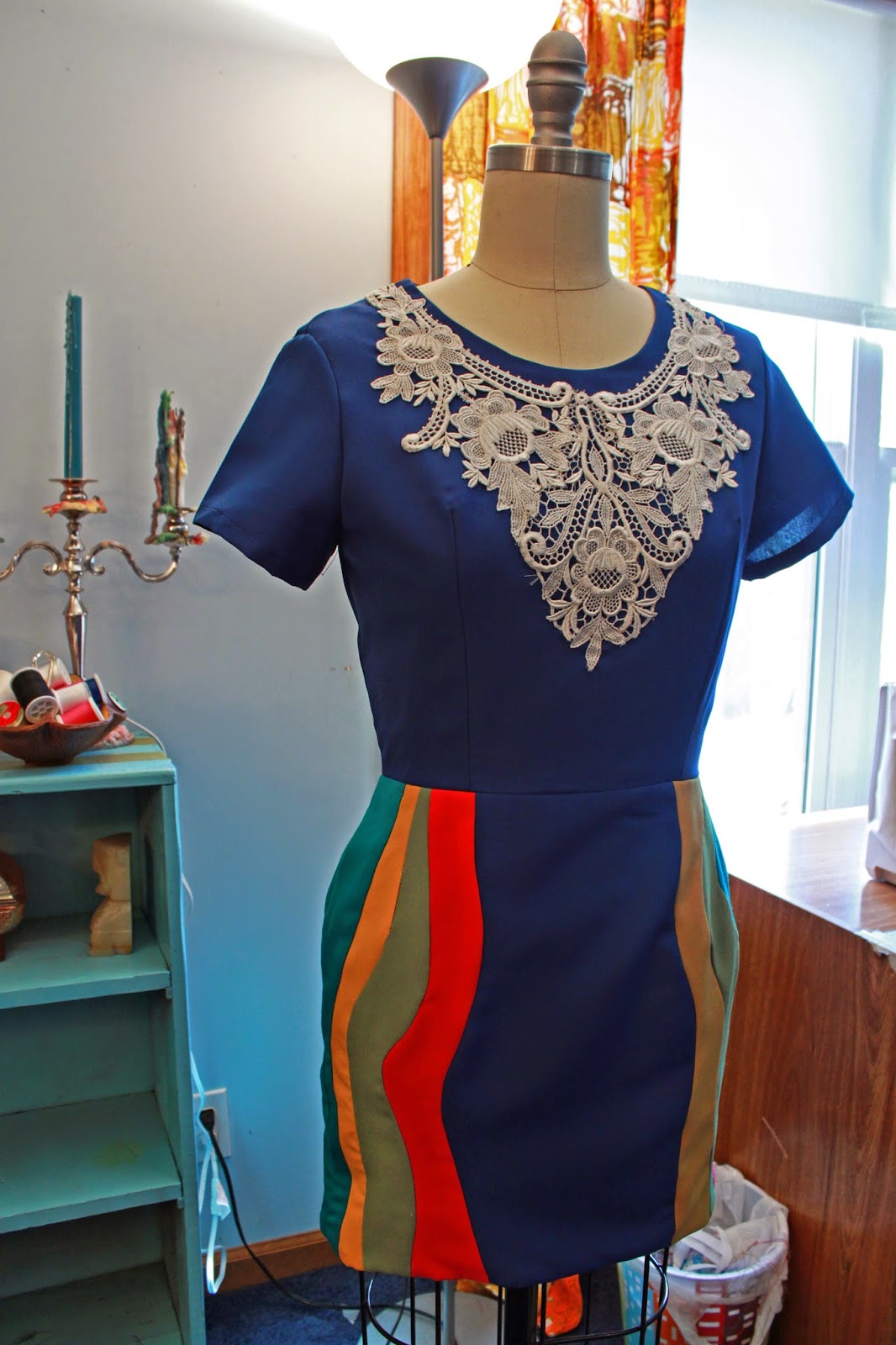 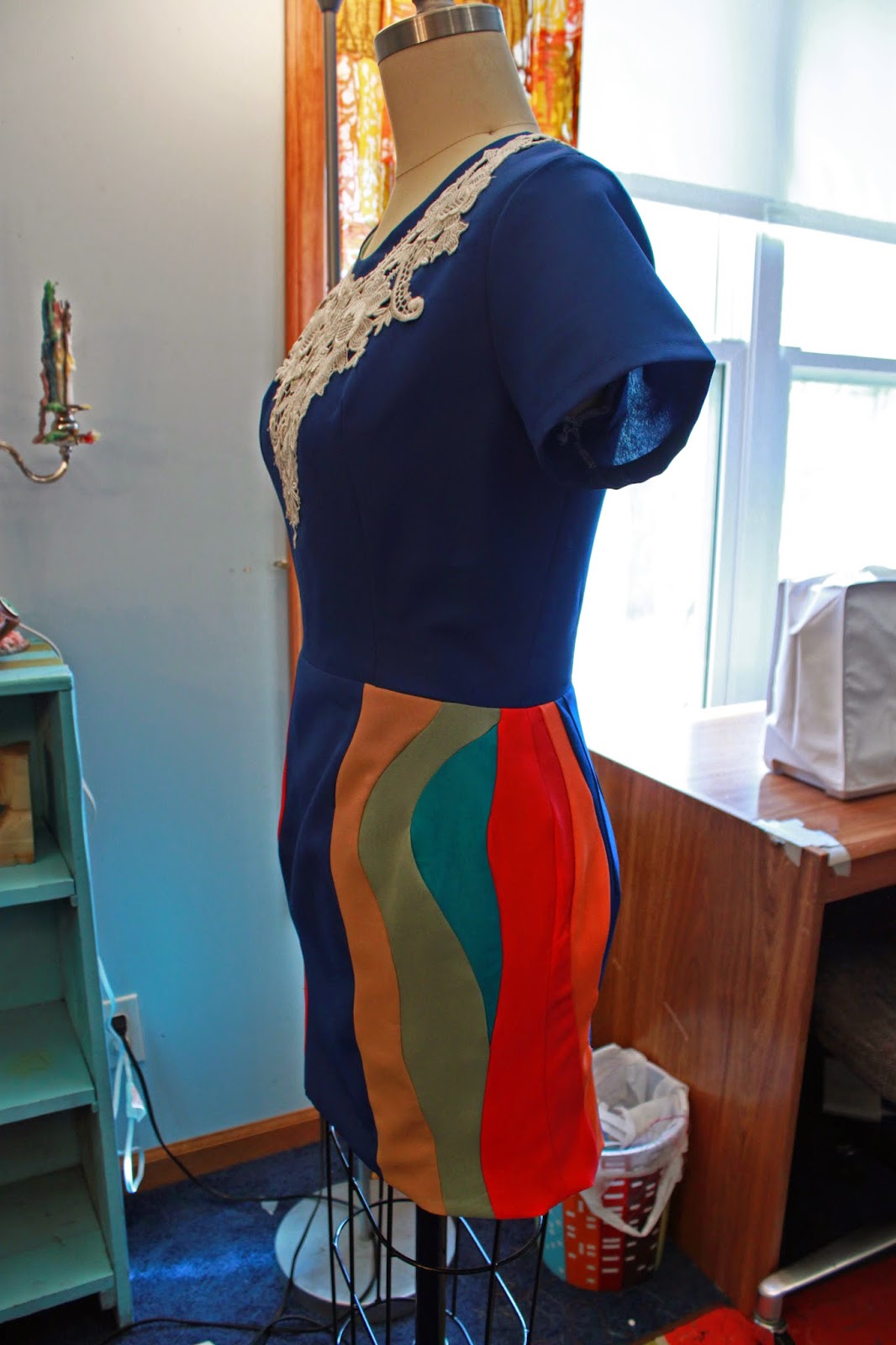 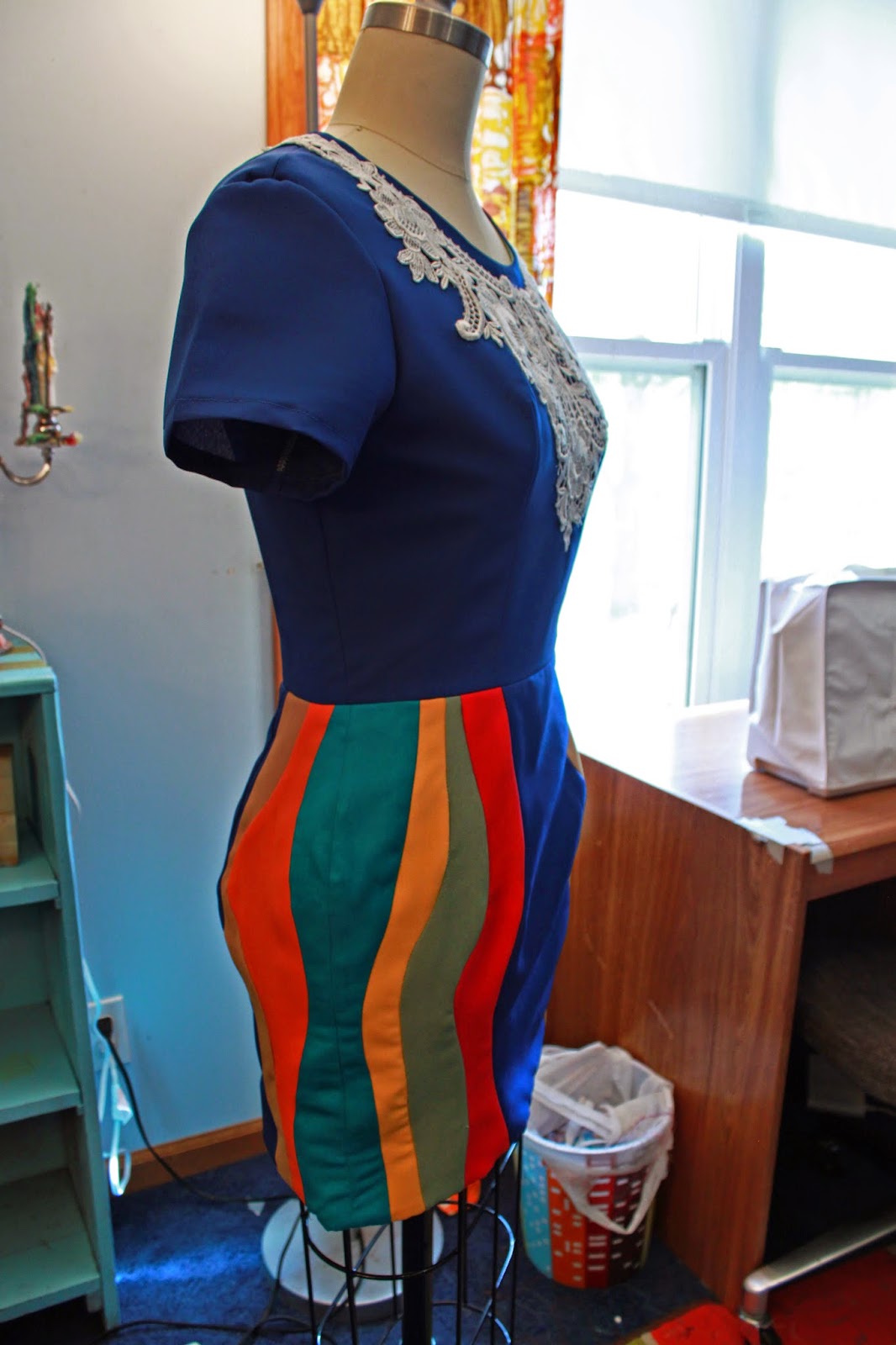 I had to edit the sleeves a bit for my giant upper arms (seriously) but I also noticed while making this that I have a TON to edit on my actual sewing blocks. I had edited them before a while ago, but I noticed recently that the bust point is in the wrong place, some darts are not aligning correctly, and things overall aren't working as well as they should so I am moving right along and spending some time really editing my blocks.

It's boring, but it's something that needs to be done. 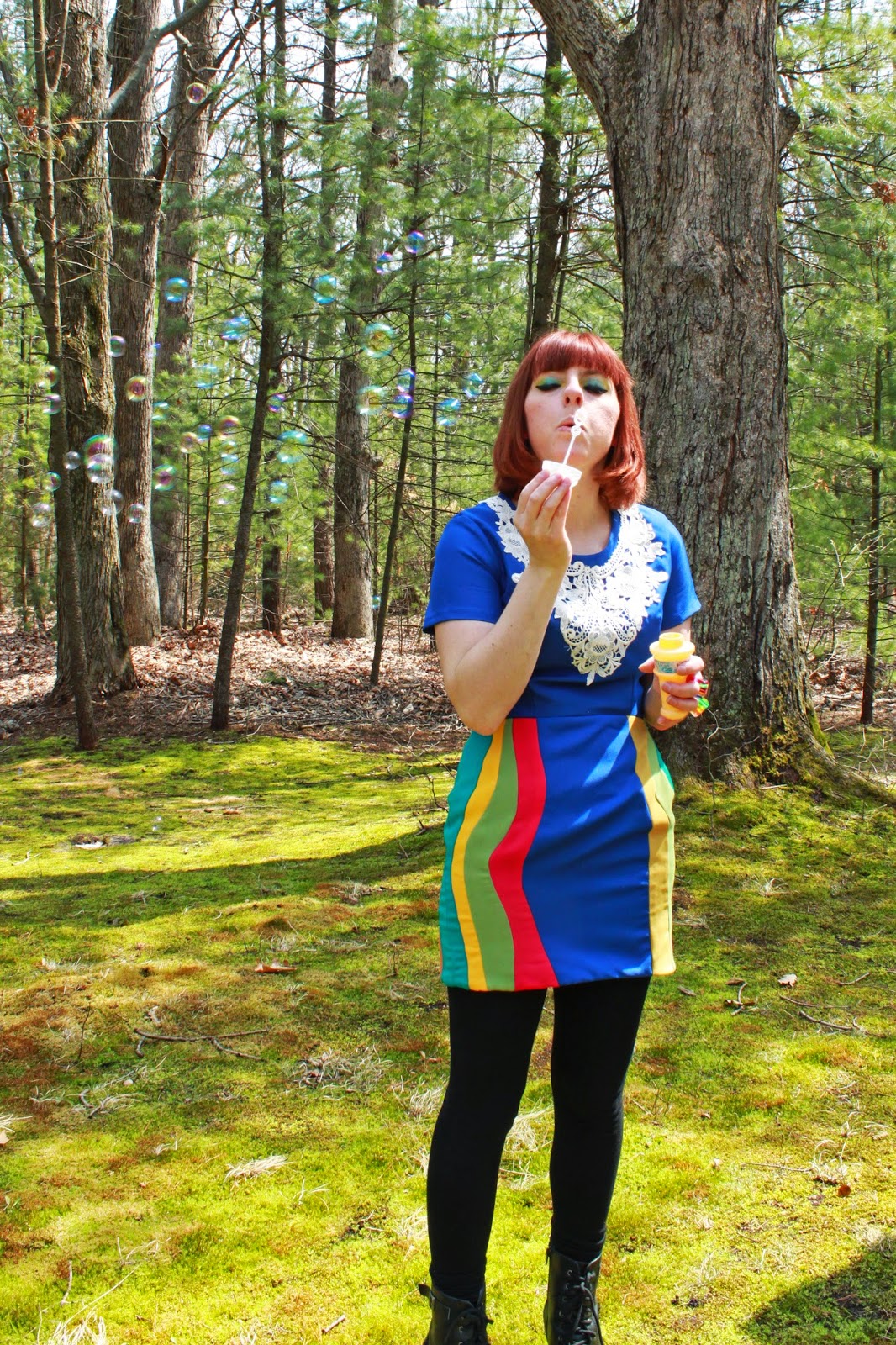 The lace collar on this thing is pretty cool. It's one of those things I impulse-bought at Textile Discount Outlet (2121 W. 21st St. in Chicago if you want to spend hours on 3 giant floors of fabric, trims, etc.). I'm pretty certain I bought it for like, 50 cents or something and it's just been hanging out in my stash for years now. It's definitely made for a neckline. It could even be intended for wedding dresses, but I liked the usage of it with my typical colorblocking. 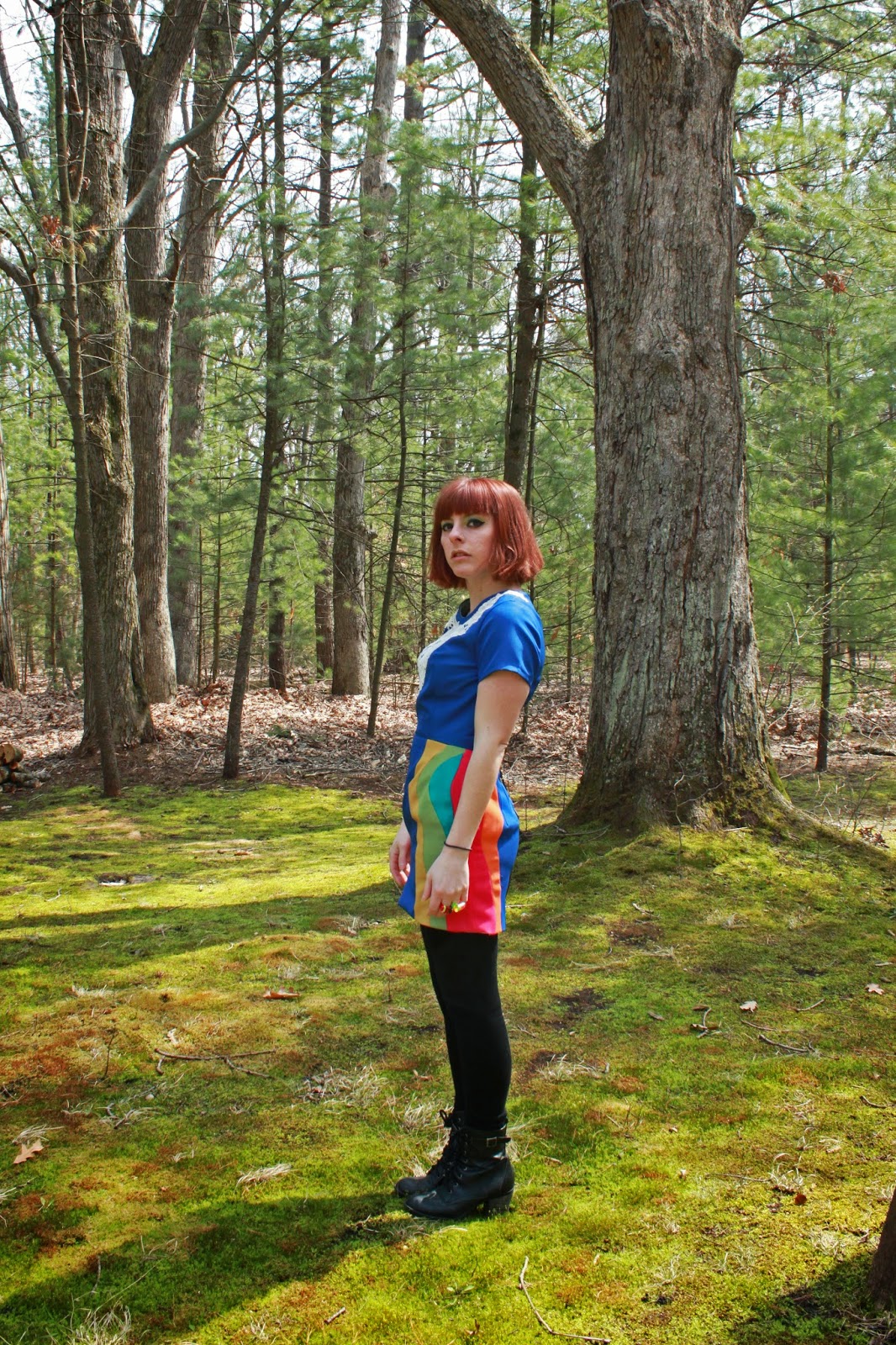 I also think it might be time to break up with my long-time favorite, polyester poplin. It shows movement way too well and crinkles as you move. I am definitely transitioning into using fabrics with a slight bit of stretch (even if it's only 2% stretch) because I think that the fabric lays better. That, and now that I am not scared of ANY stretch-knit, I'll be buying it a ton more. 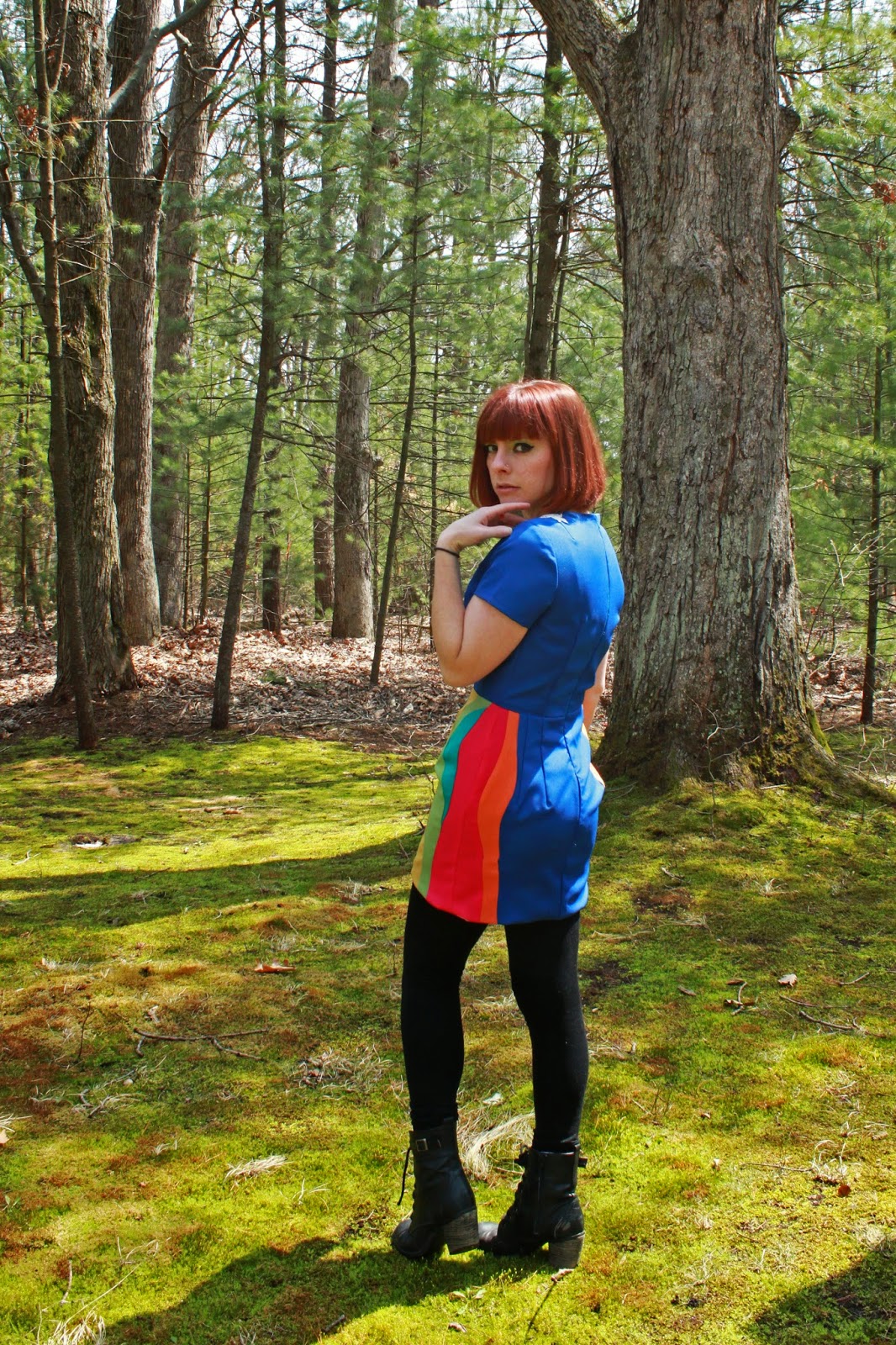 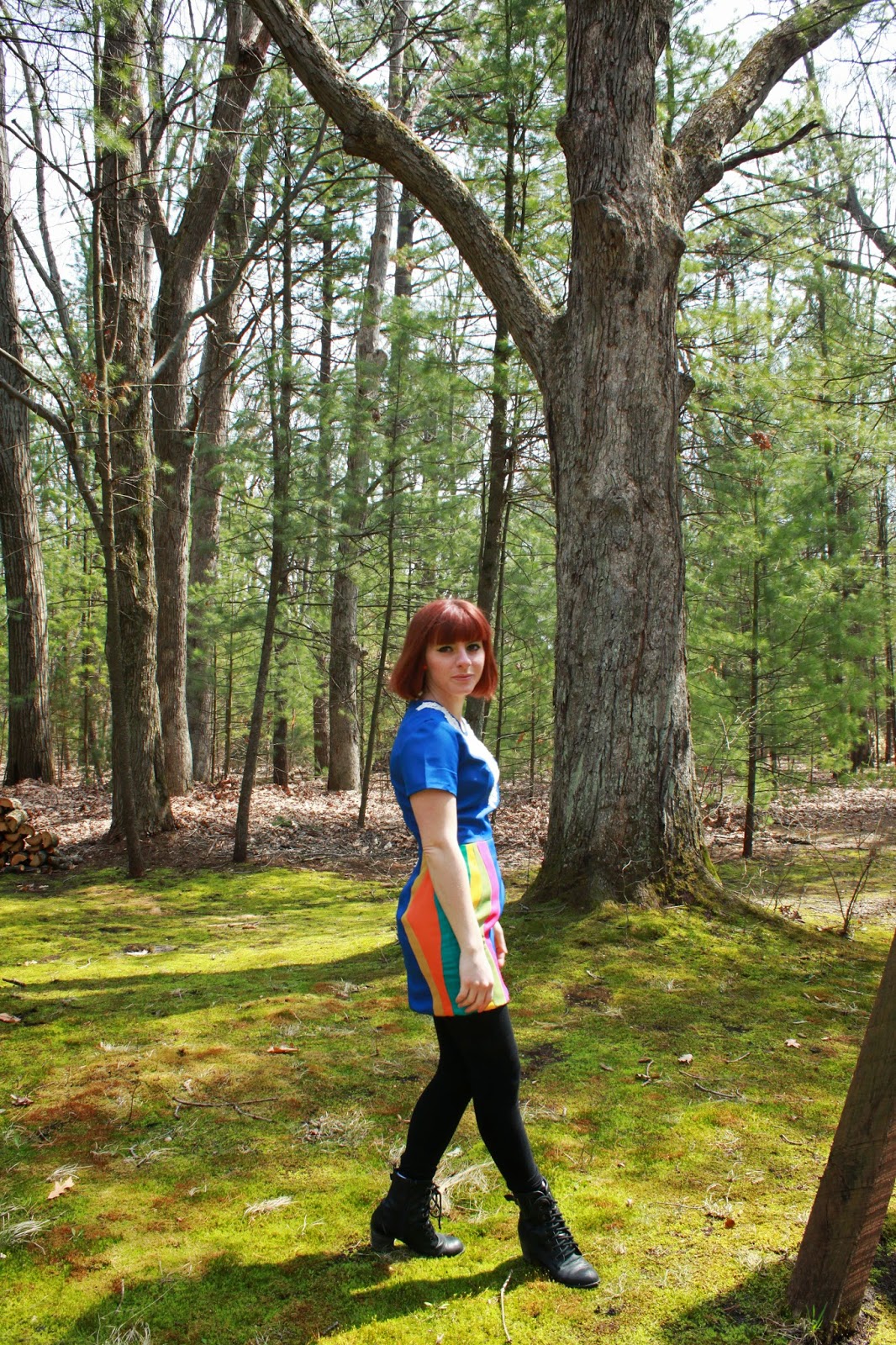 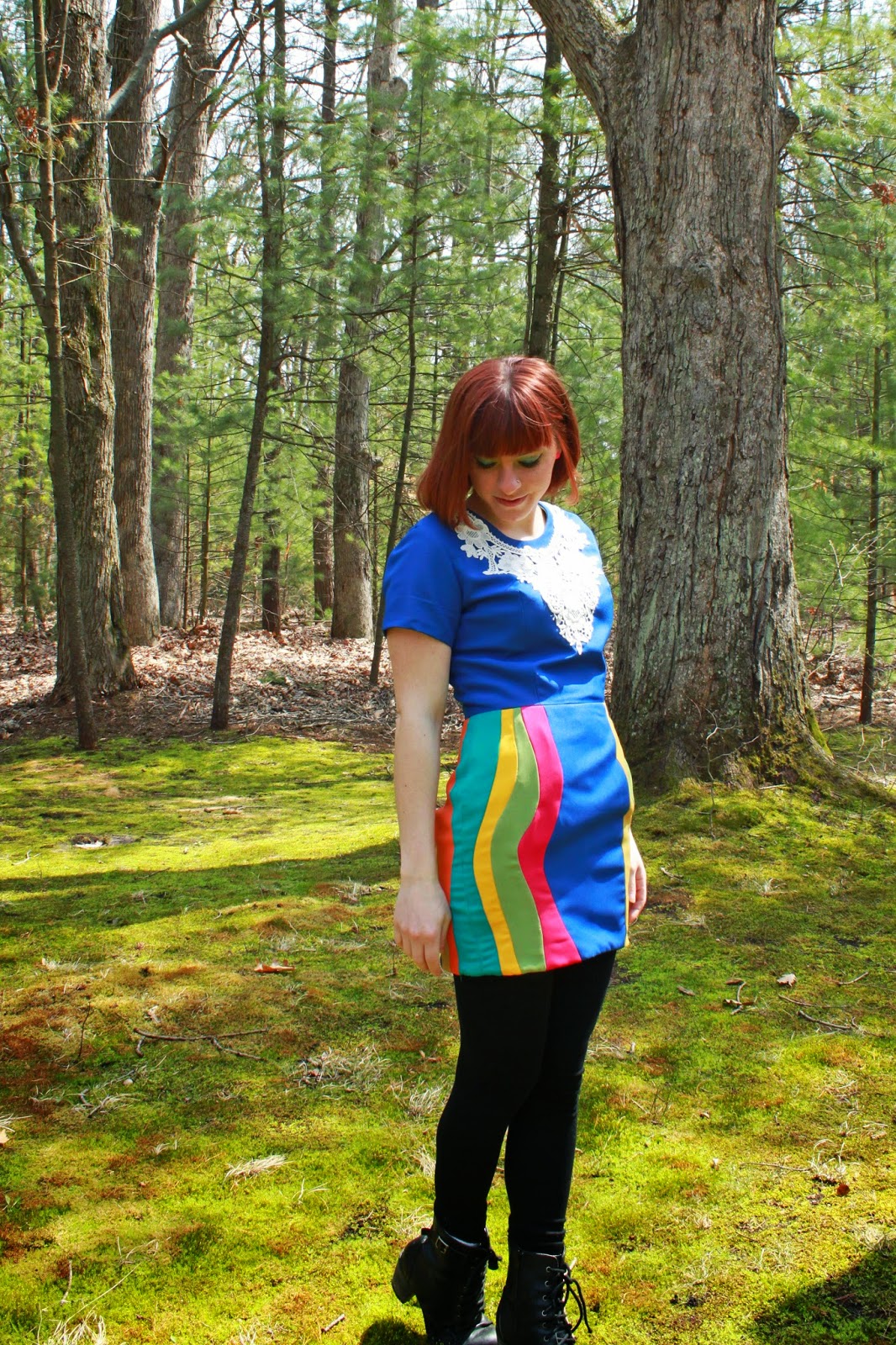 So yeah! Fun experiment with scraps. If I were to do this again, I perhaps would go with a more a-line design on the skirt because then the slight pull the opposing curves make would be much more easily camouflaged.

This is definitely something I will still wear despite minor flaws, but usually that happens the first go 'round of anything.

I also like that this dress somehow reminds me of the vector artwork from 2003 album Zwan's "Mary Star of The Sea". 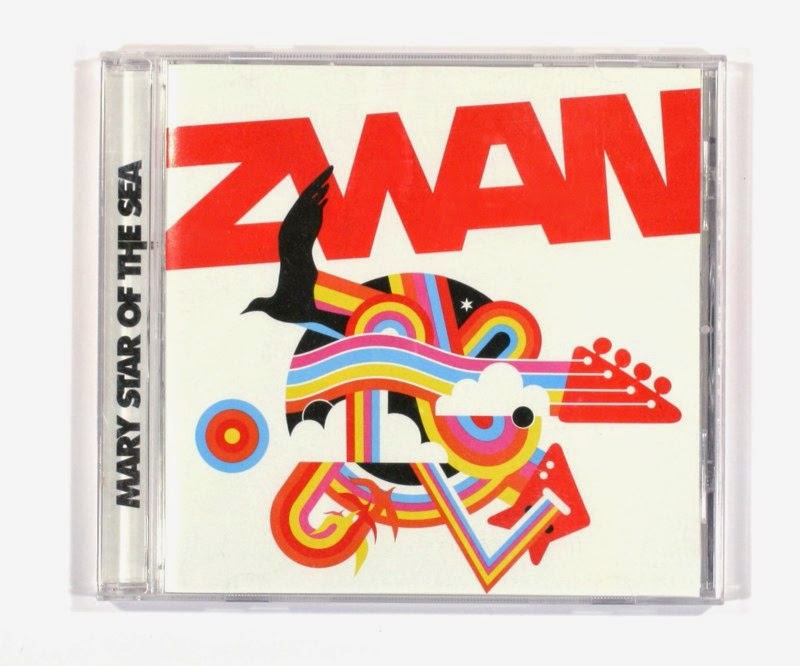 I've also always loved this from this album promotional material too: 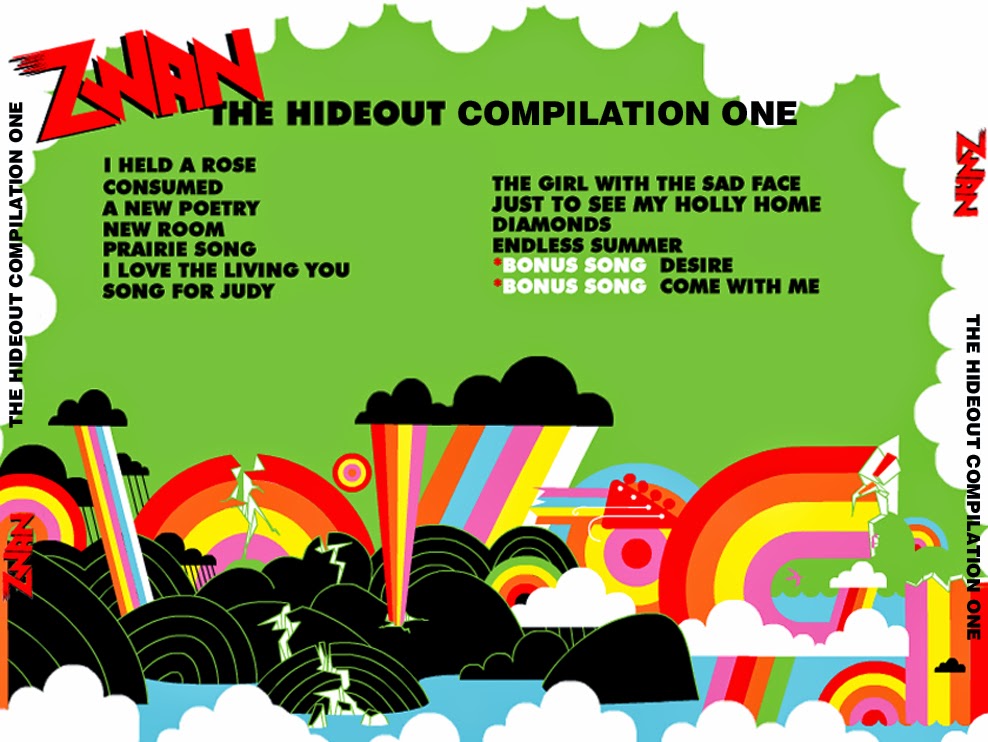 I've always been a huge Smashing Pumpkins fan (long before I ever even thought of moving to Chicago) and I have yet again been listening to Zwan. The 2nd half of my junior year of high school was all-Zwan all the time as the album had just come out in 2003. It's a shame that they didn't put out more, but I'm sure they had their reasons. I'm still planning on visiting Billy Corgan's tea shop in the suburbs (who'da thought, huh?) at some point or another.

And if you haven't heard Zwan, I highly recommend checking them out! I love that their video for "Lyric" is soooo Chicago-heavy. I had never noticed. It's them under the el tracks, walking around parts of Wicker Park and also walking around nearby the Metro in Wrigleyville - all places I know far too well!

So here is both the full album as well as that Chicago-heavy video. Enjoy!