Tools of the Trade

July 24, 2014
Well, I'm currently in the process of packing up the sewing room to move to greener pastures. I have a new studio that will be about twice the size of the one I am currently in now (though I really like how cozy and compact it is) to make room for the rest of Manic Pop's products and inventory that is upcoming. That being said, I haven't been sewing at all due to packing and coordinating the move. Plus, my sewing machine desperately needs a tune-up as some odd bobbin tension problem is happening. (I cleaned it out, adjusted the upper tension, even adjusted the bobbin tension, re-threaded a bunch of times, etc. and still not much luck!) It's about time to take it in anyway since I have had it for about 9 years now and have never taken it in for a tune up. Whoops.

For the moment though, I want to talk about machines! 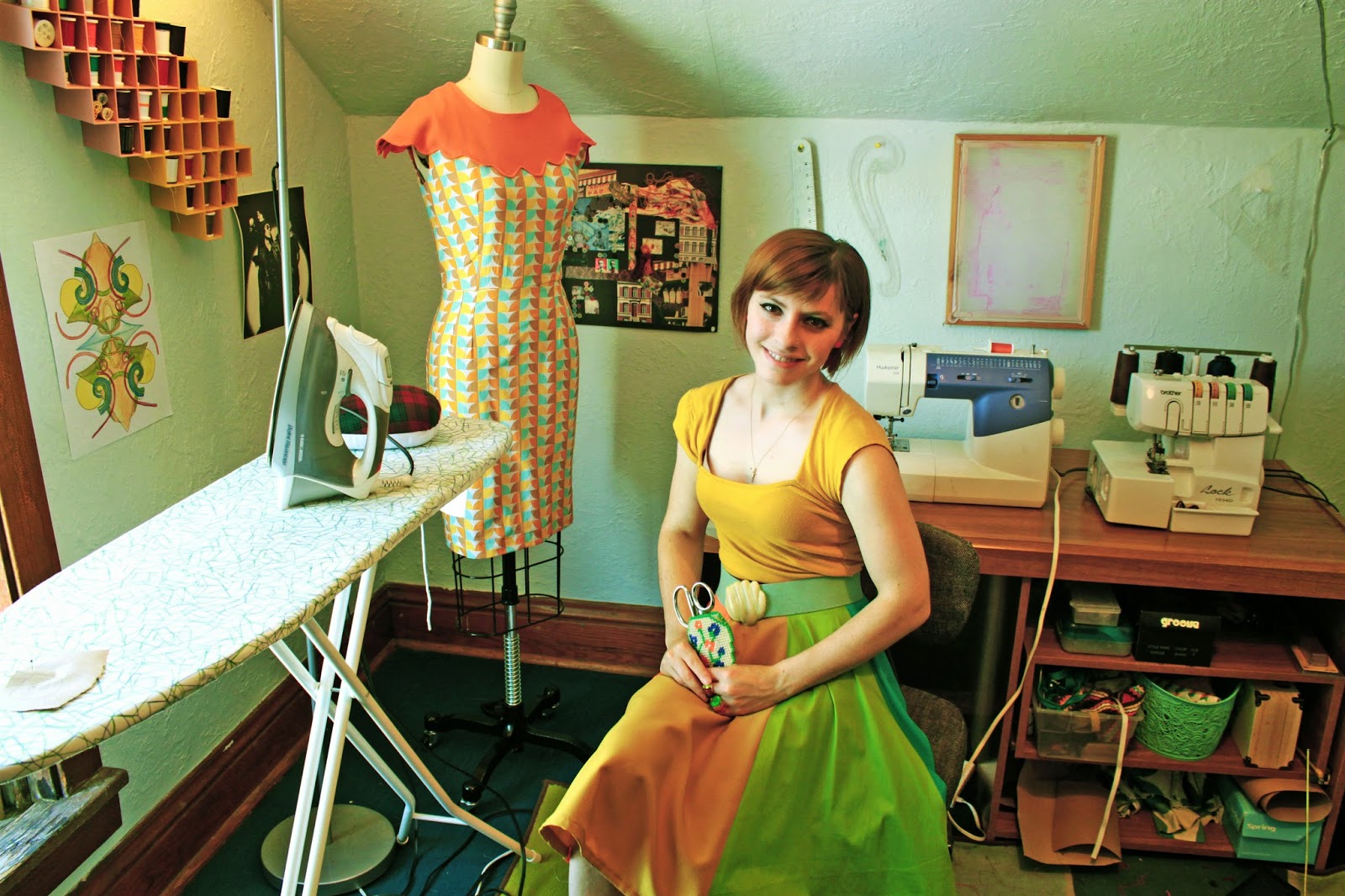 When it comes down to it, I'm an analogue girl. I am also a minimalist. This is why I have only had 2 machines for the past decade of sewing, aside from the fact that I had been long been living cramped apartment life in Chicago up until we got a house-deal.

I know some people are really into gear with their art, but I suppose I am a bit of a purist when it comes to constructing garments. In design school, the industrial machines only ran a straight stitch and that's really what I learned on. It took me a little adjustment period of actually get used to the slowness of my home machine, but hey.

So this is my trusty ol' machine! 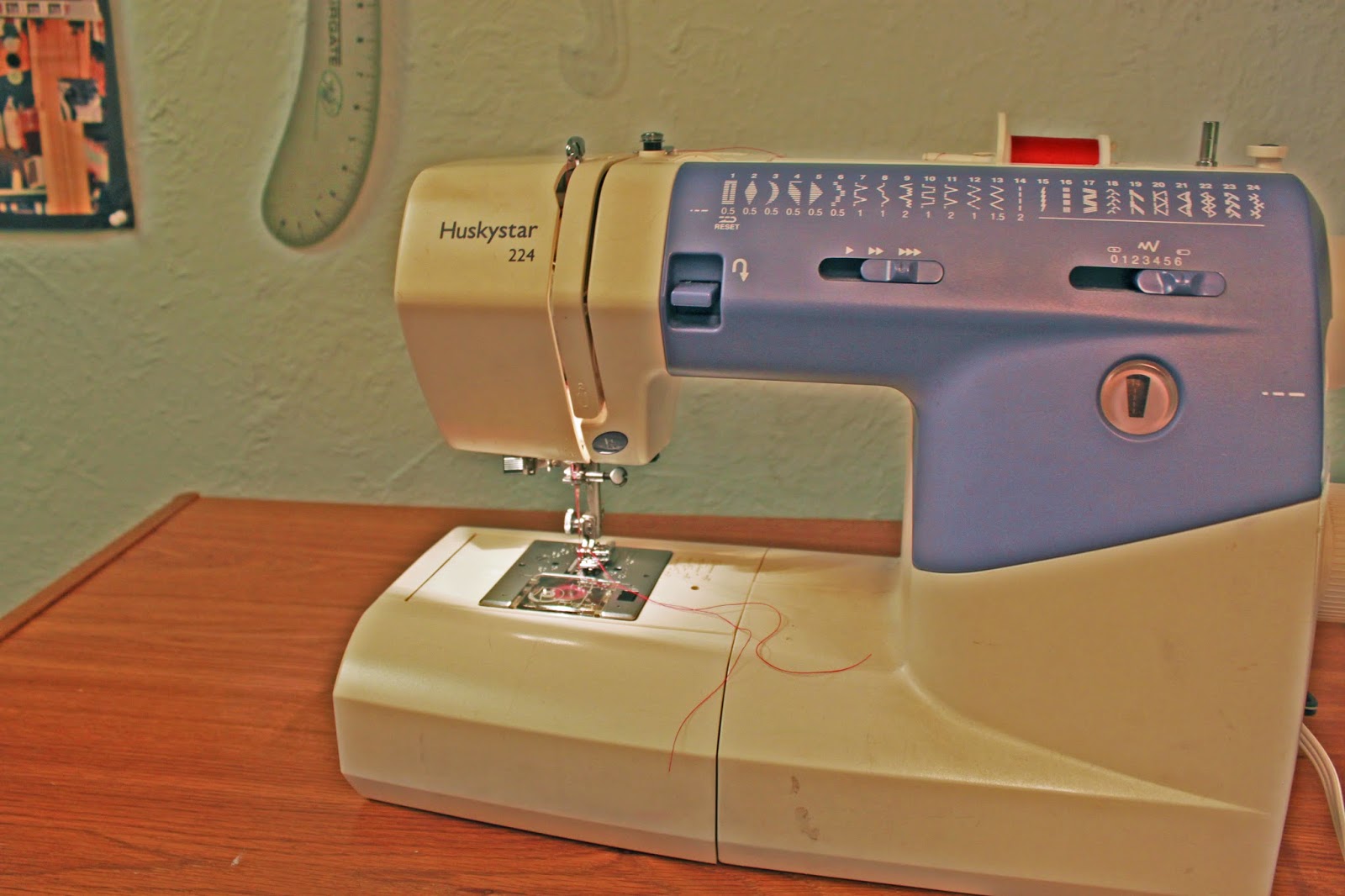 This is a HuskyStar 224 by Husqvarna/Viking. It's very basic, analogue, but pretty tough. Like I mentioned, I've been sewing on it consistently for about 9 years and have (not recommended-ly) never had to get a tune up with it. (Hey! I was a poor college student, still living in the 3rd largest city in the US!)

When I took my first sewing class in 2004 at Muskegon's Lakeshore Sewing during my senior year of high school this is the machine I brought to class. (I'd been sewing here-and-there before that, but had never been trained.) I remember the ladies there teaching the class making a big deal about this thing, and in 2004 I suppose it was a pretty nice machine. I have no idea since it was given to my mom initially as a gift, but then she decided she didn't need it so she sent it off to me in 2005 when I was in design school. As you can see, it has only 24 stitches. I rarely use anything else aside from the straight stitch (14) and the buttonholer function (1). I just learned the other day while flipping through my manual that one of those stitches is a blind-stitch hem stitch (7? Maybe 9?) Either way, I haven't tried that one out yet. I tend to do a blind-stitch by hand if necessary.

A handy feature on this machine is the reverse function which makes it easy to do a backstitch when starting and ending seams. What makes this machine so tough and long-lasting is that (as far as I know) it has almost all metal parts on the inside. Cheaper machines tend to have plastic insides which deteriorate much faster.

While this machine definitely isn't top-of-the-line (and very well may never have been) it's more along the lines of what you would call "pro-sumer" - a professional-but-still-consumer machine. I've found on the internet that it originally retailed for about $600. But like I said - I wouldn't know since it was a re-gifted gift. Haha.

Part of me would like to play with a new Husqvarna/Viking machine with a digital software screen on it just for fun, but knowing how much more I could do on this machine (and don't) it would be a waste of money for me unless it was a gift. Plus, the digital panels scare me! What if that thing goes down?! You would need an actual programmer to fix it now versus a technician. I can be fairly old-school when it comes to these things.

A second essential machine in every designer's arsenal would be a serger. Sergers can sometimes be a little scary at first. I was trained on an industrial serger which is by far the scariest since it's nearly impossible to thread if you don't know what you're doing as well as ridiculously fast, but this one is super-simple. The only thing about this one is that it runs a little loudly, but I'm fine with that. 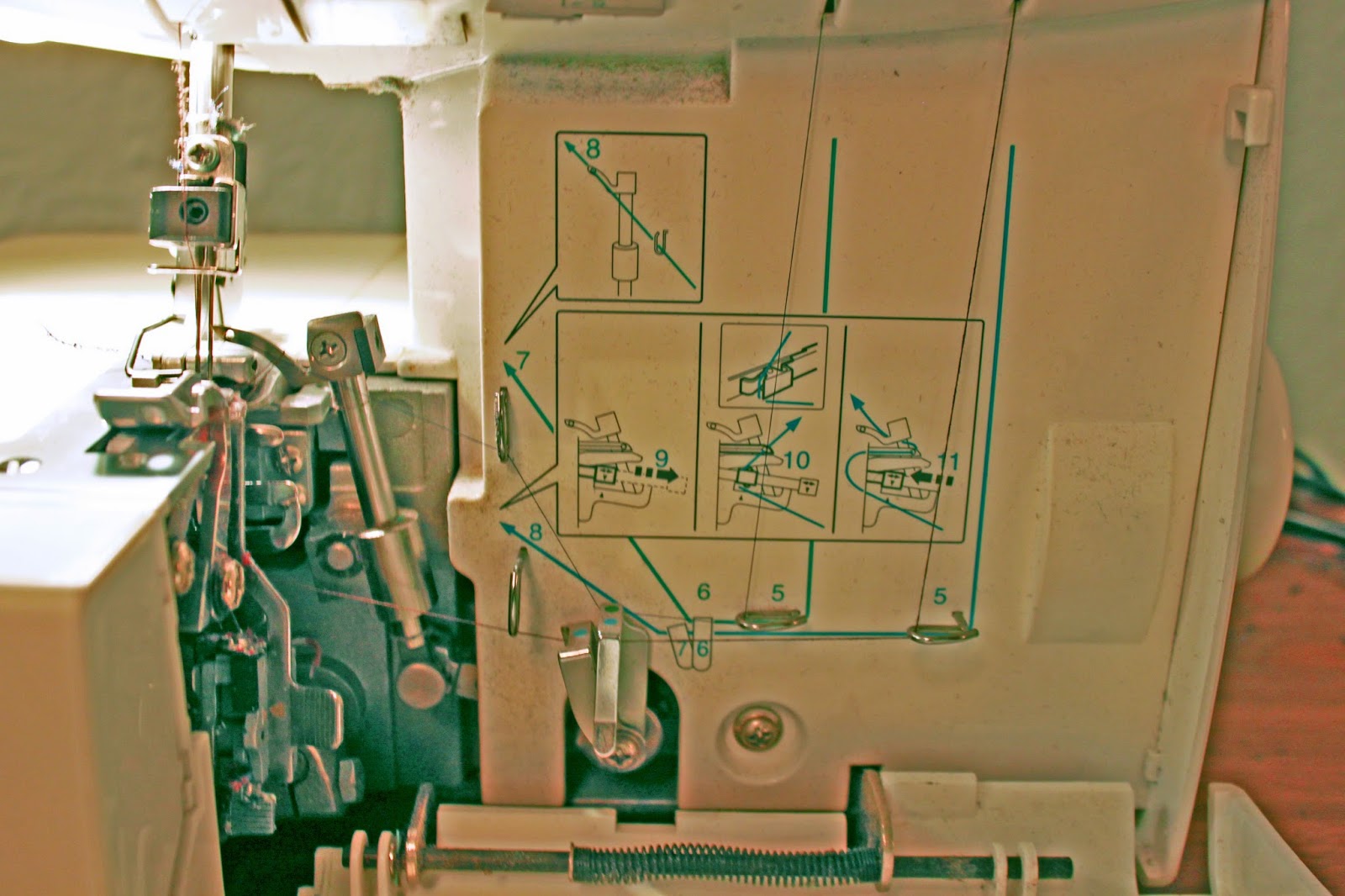 You wouldn't believe that I JUST dusted this thing out, but it's already dusty again!

For those of you that are unfamiliar, a serger will cut and enclose a seam with up to 4 threads on the inside of a garment. Take a look at the inside seam of a t-shirt you have. See the loopy thread? That was done by a serger.

I personally use mine for finishing off the insides of garments on the pattern pieces before sewing with wovens. With a stretch-knit, I will only add a 1/4" seam allowance and sew the knit directly on the machine. This was sort of scary at first, but I did it successfully with an entire dress very recently!  I think I've read that you can do a real coverstitch on this model, but I haven't toyed with disabling the knife on it for that yet as I sew primarily wovens. I have usually faked a coverstitch on my sewing machine after serging!

The nice part about this machine is that using cone thread (classic serger thread) isn't a requirement - you can use regular spools of thread! I tend not to though because that little notch on the spools usually gets the thread caught and pops off of the thread base which makes for really annoying serging. Plus, I have a ton of cone thread to go through that was given to me! This machine will use either 3 or 4 spools at once and I prefer 4. Typically you would use all the same color, but I like to break rules a lot. 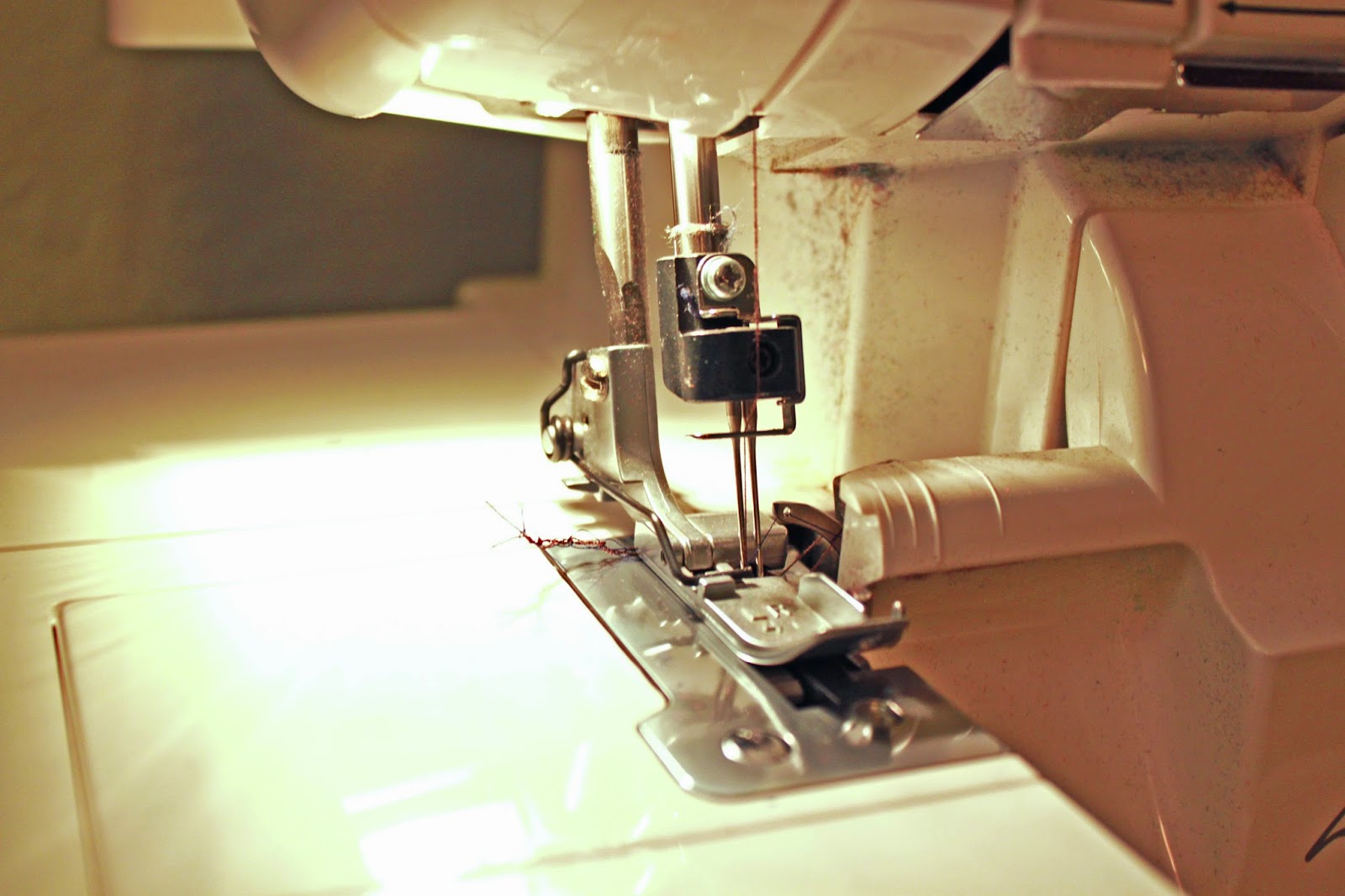 This machine also uses standard sewing machine needles so if you break one, you don't have to worry about finding some odd needle type. I've only broken I think one needle on this in all 7 years I've owned it and I use it for almost every garment. 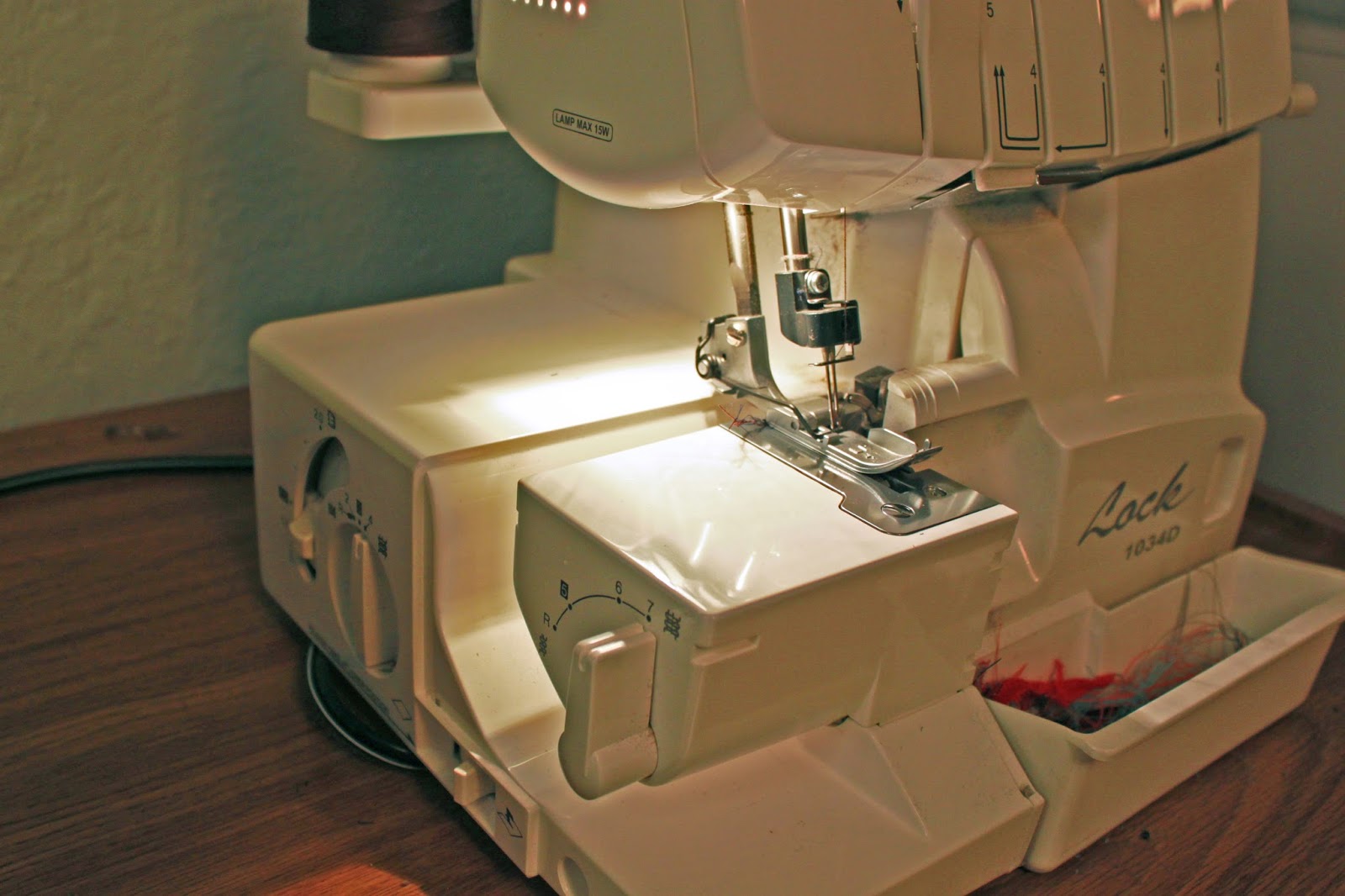 This one also has the removable arm for it  (just like your sewing machine) which is fairly standard but it's still a nice feature to have. It makes armholes and pant legs so much easier.

I'm sure this machine does WAY more than I actually use it for (like ruffling, decorative stitching, sewing on piping, etc.) but like I said, I tend to be simplistic in my sewing practices.

Fun Fact: a former Project Runway contestant also has this serger. I spotted it in the background of her studio once in an interview with her!  I think that speaks to the durability and quality of this thing even though it's so affordable. 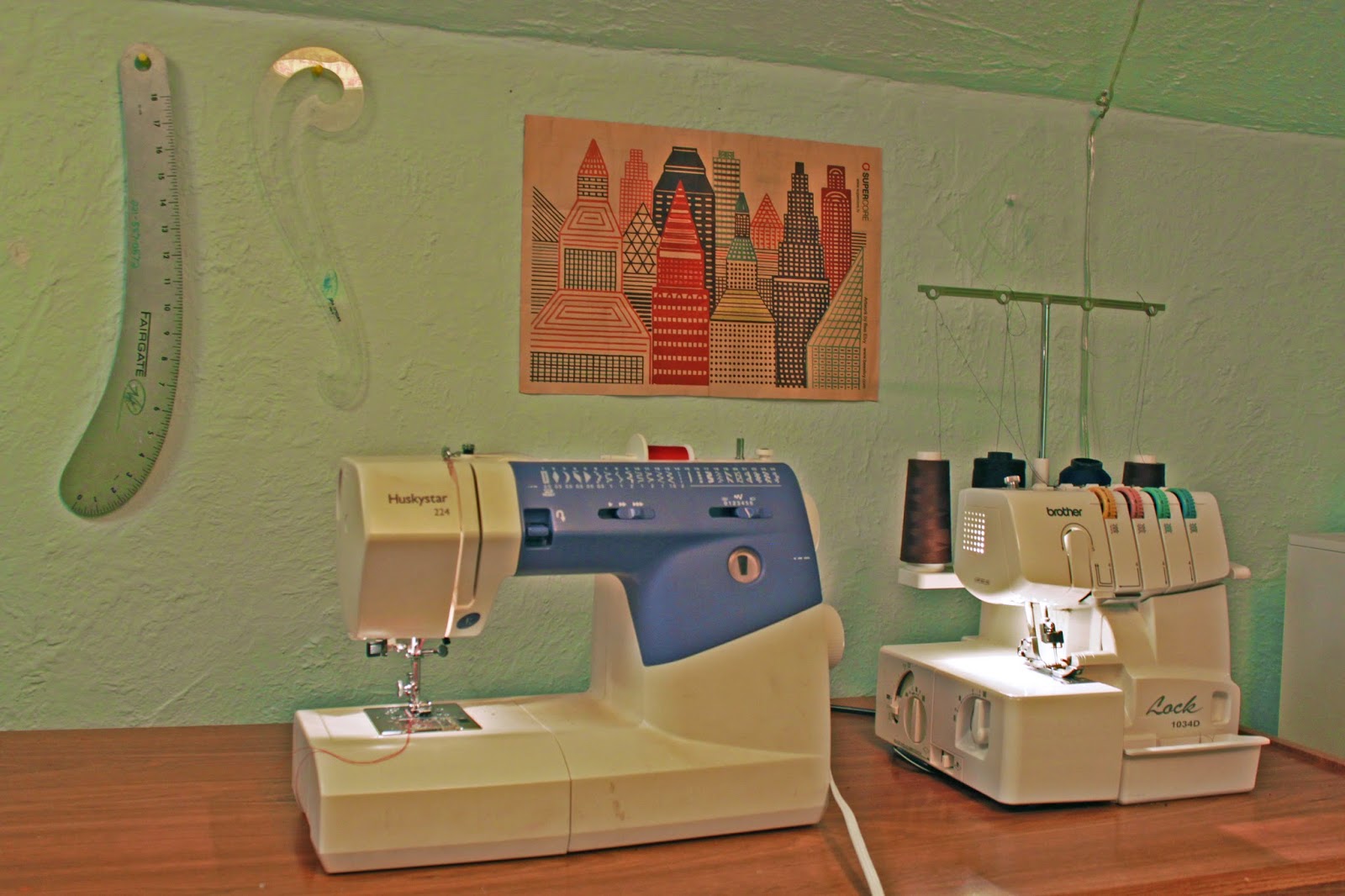 So that's a roundup on my machines! Very basic, but completely essential.

I'll be looking around for a backup sewing machine soon just to have around (I'm planning on a metal vintage one of some sort) since this one needs to go in the shop. With me creating far more garments than ever before, I'll need some sort of backup around!

Feel free to tell me a bit about your current machine in the comments as well as suggest which vintage machines are great to look out for!