The Tetrahedron Dress and Lipstick and Lyrics

November 13, 2011
So last night was the 7th annual Lipstick and Lyrics, which is an event produced by the Chicago Gay Men's Chorus that features drag queens singing live. It was definitely a fun night!

I've been designing for SPRADA, one of the drag queens involved in this event, for her webseries since June - The Legend of SPRADA so it was really easy to work with her once again. (That, and I have missed whipping up pieces for her!)

Before SPRADA, costume design/stage clothing is not something I had really considered though in high school I primarily was the one making Halloween costumes for everyone by editing existing garments or creating pieces we needed for the outfit. Each week or so with SPRADA and the tight filming schedule was like an episode of Project Runway for me as we had to make a dress out of garbage bags one week, and then the next week we would need what turned out to be the bandage-look dress for another scene. It was such a whirlwind that I was usually unable to get great photos before I had to turn the garment over to Ms. SPRADA herself to wear the next day.

This last look here Spencer (SPRADA's real name) and I did over the phone. He described to me what was his number was (a mash-up of Kylie Minogue's "Can't Get You Outta My Head" and Robyn's "Dancing On my Own") and we went from there. I envisioned this black sheath dress of sorts with lots of sparkle/studs/bedazzling on the shoulders and we decided we liked that idea.

It was only at work one slow night did I get the idea to make it into a crazy/bedazzled tetrahedron dress. What's a "tetrahedron", you ask? 3-dimensional triangles with a triangle base. My third love is mathematics, in case you haven't noticed already.

Spencer and I have such chemistry design-wise that it's amazing that we can come up with this over the phone and it's exactly the sort of feel he's going for.

Here is the sketch I sent him sometime last week: 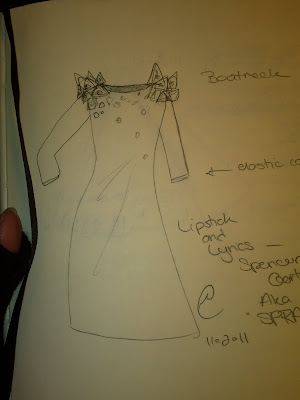 Along with the detail sketch: 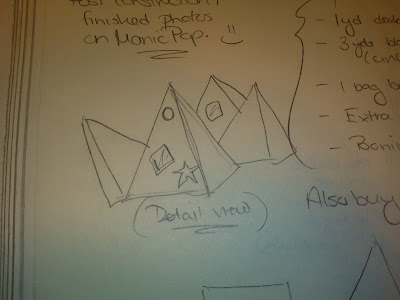 Wednesday was my finale - hand-sewing the tetrahedrons onto the dress for 5 HOURS. I had not planned on it taking that long, but it certainly did. 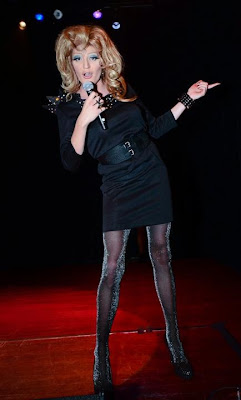 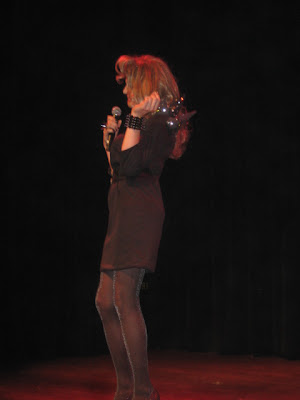 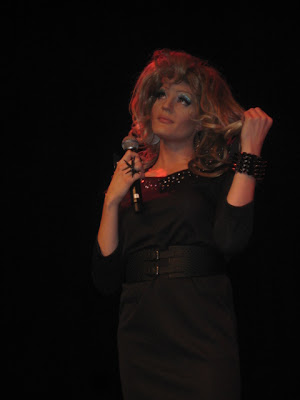 Here are a few photos on the dress form at my studio for a closer look. 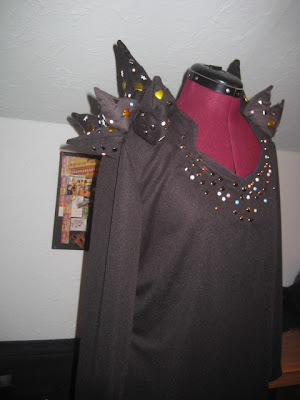 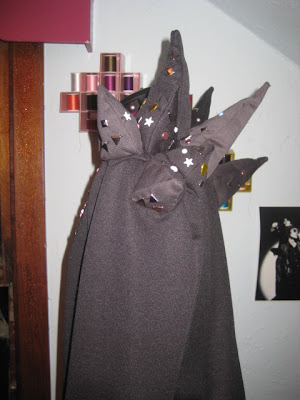 Quite a fierce look! Perfect for a woman who is singing about being unlucky in love, but smitten nonetheless.

SPRADA also wore the garbage bag dress again for the first number of the show. This is a photo of me working on it from this past summer. We basically stapled this thing together onto a simple black dress that already fit Spencer well. I added on an applique to make it snazzier as well as updated the look slightly for the show last night. 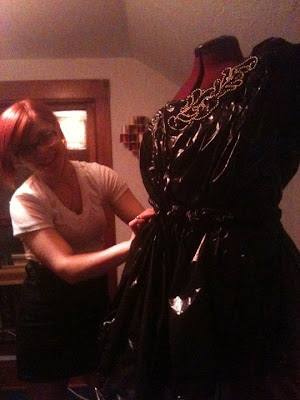 This is the sketch for the bandage dress I mentioned earlier and the result (we ended up going with the purple/black colorway): 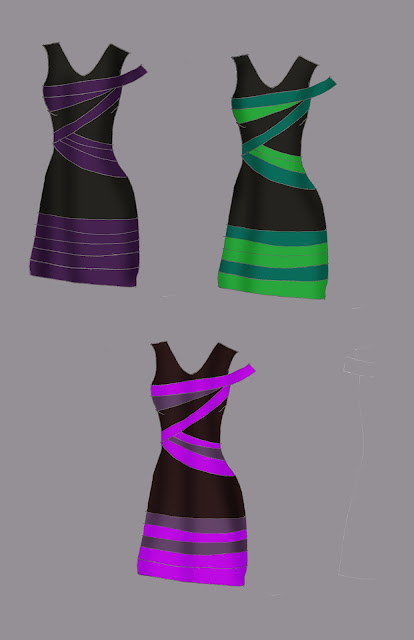 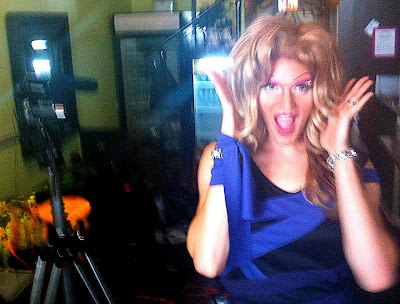 For the premiere of the webseries in September, we did this look, though evening wear is totally not my forte. I'm actually quite pleased with how this one came out. 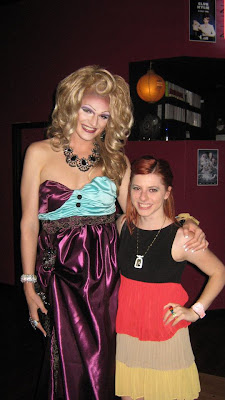 Overall, the tetrahedron was a success. It was very inexpensive to make, but quite time-consuming. Spencer says he will be using it in future performances and another local drag queen has expressed interest in borrowing it upon seeing the sketches. We'll see!

I'm sure I will continue working with Ms. SPRADA in the future as she's amazing to work with. Keep your eyes peeled for more work from me!